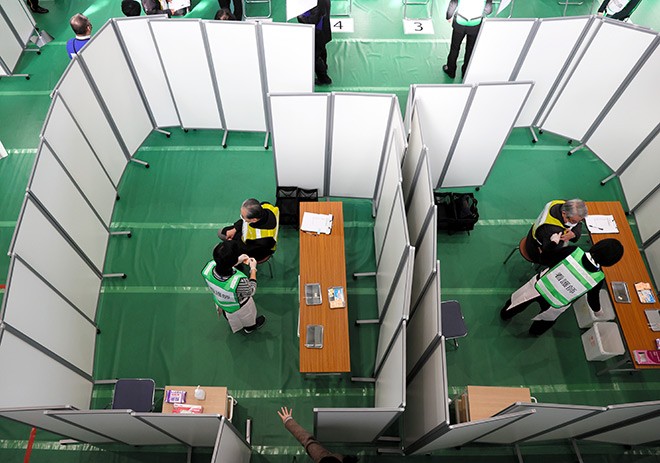 Officials at a drill for mass inoculations to halt COVID-19 in Kawasaki, Kanagawa Prefecture, on Jan. 27 (Hikaru Uchida)

About 60 people, including Kawasaki city government employees, participated in the Jan. 27 drill that was organized by the health ministry and the city in Kanagawa Prefecture.

The participants simulated the vaccine operation flow while avoiding the risk of spreading the novel coronavirus.

Local governments have know-how on distributing vaccines for influenza and other infectious diseases. But they are not necessarily well-equipped for the speedy and mass inoculation that is planned to end the COVID-19 crisis in Japan.

“We want to use the knowledge obtained from the drill for those across the country,” Kawasaki Mayor Norihiko Fukuda said. “I understand that hopes for vaccines has been rising, but resources are limited.

“I urge the central government not only to speed up the process but also to spread the correct information about the vaccine based on reality,” he added.

The health ministry said it will share the lessons learned from the drill with local governments nationwide.

The drill was held at a gymnasium at the Kawasaki City College of Nursing.

Three booths were set up for diagnoses of and interviews with participants. Two additional booths were made available to administer the inoculations.

In a waiting area, a safe distance separated the folding chairs.

According to officials, the entire process, from being checked to receiving the vaccination, took between 10 and 30 minutes.

Those who arrived later needed more time to complete the process, officials said.

The Japanese government has signed a contract with Pfizer for about 144 million doses this year, enough to inoculate 72 million people.

The health ministry plans to start administering the vaccine on medical workers by late February.