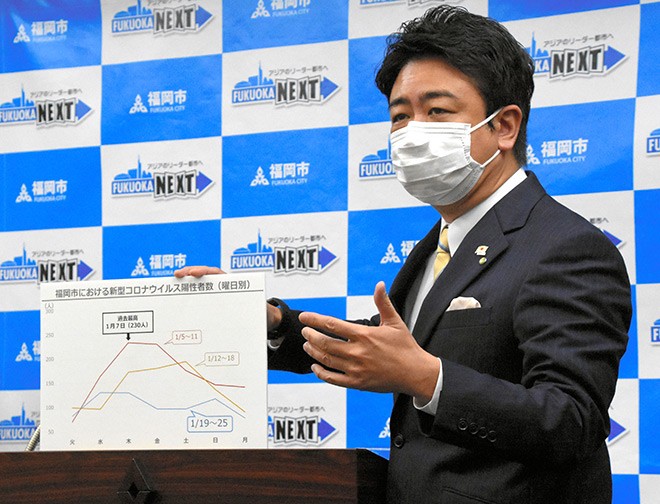 Fukuoka Mayor Soichiro Takashima explains the spread of novel coronavirus infections in his city at a news conference on Jan. 26. (Hayato Jinno)

The central government calls its vaccination campaign “the trump card” against the novel coronavirus, but its reshuffled plans and changing schedules have frustrated local officials struggling to prepare for the inoculation process.

The campaign will be one of the greatest vaccination programs in the country’s history. Local governments are already trying to overcome a number of stumbling blocks, including securing large sites and medical personnel for mass vaccinations while dealing with the constant threat of the contagion spreading in their areas.

They say the central government, which plans to start inoculating medical workers with Pfizer Inc.’s vaccine in late February, is exacerbating the logistical nightmare with its lack of information and its indecision.

The municipal government of Yokohama, a city with a population of 3.75 million, plans to set up at least one mass vaccination site in each of its 18 wards.

City officials are drafting a plan that calls for residents to make reservations for inoculations to reduce crowd sizes at the sites and the risk of spreading the virus.

A single shipment of the Pfizer vaccine to a vaccination site will contain a minimum of 1,170 doses. Officials need to ensure that enough residents will show up for a shot to avoid wasting the doses, which become ineffective days after they are thawed.

Roughly 930,000 individuals 65 or older live in Yokohama. The central government recommends that vaccinating such individuals, who are at a higher risk of dying from COVID-19, be completed in nine weeks.

But Yokohama city officials say preparing for that task is proving difficult, given the “scant information provided by the central government on how many vaccines will be available and when.”

Yokohama is not the only local government confused by the central government’s lack of information and ever-changing briefings about vaccines.

“If we have avenues to secure vaccines by ourselves, we can make efforts for that purpose, but that is not the case,” Aichi Governor Hideaki Omura said at a news conference on Jan. 22. “The central government should inform us early about when and how many vaccines will be shipped to us.”

Gunma prefectural officials started preparations for the vaccine program in December, when they were told by the central government that a vaccination site should use all 1,170 doses distributed in one shipment.

Based on that guidance, prefectural officials met with their municipal counterparts and representatives of local doctors’ associations to select medical institutions for the vaccination program as well as locations to store the vaccine shots in ultra-cold temperatures.

But they were forced back to the drawing board earlier this month when the central government revised its guidance and said they do not need to use up all the doses shipped in one go.

However, at a Jan. 25 meeting for local officials, the central government revised its earlier explanation and moved back the mail delivery of the coupons to the middle of March.

“The central government’s way of releasing information is incremental,” said an official in charge of Saitama’s vaccination campaign. “Each time, we are unable to know if the information provided is accurate.”

At a Jan. 25 new conference, Mie Governor Eikei Suzuki urged the central government to decide on whether doctors should stop treating their COVID-19 patients, noting that those doctors will take charge of administering the vaccine and may have to temporarily leave the hospitals.

“If they have to take time off from treating patients, the central government should provide them with funding and compensation for having to do so,” he said.

An official with the health care policy department of the Shiga prefectural government raised similar concerns about the expected absence of doctors for the inoculation process.

“Health care personnel are treating patients not only with the coronavirus, but also with other illnesses,” the official said. “When they are absent for the vaccination program, how will hospitals be operated? We need to discuss this in detail.”

The health care systems in depopulated areas are particularly ill-equipped to efficiently carry out the vaccination program.

An official tasked with planning vaccinations with the Satsuma-Sendai city government in Kagoshima Prefecture said “the greatest challenge” will be securing personnel to administer the vaccine.

“Doctors and nurses would need to travel to communities in mountainous areas to give vaccine shots to elderly people who have difficulty moving,” the official said.

The Akita city government in the northern prefecture of Akita faces similar needs. The prefecture has the highest ratio of people 65 or older in the nation.

Akita city, with a population of 304,000, has about 96,000 people in that age bracket. Of them, around 10,000 are bed-ridden or require high levels of care while living in long-term care facilities.

“Doctors and nurses should be sent to those facilities to inoculate them,” the head of a public health care center in the city said.

And booking large sites for mass vaccinations will be no easy task.

“We are planning to use large venues, such as gyms, in our city, but they have already been reserved for weekends throughout the year by many groups,” said an official with the Iwaki municipal government in Fukushima Prefecture. “If we ask them to change their schedules, it means they would have to cancel events they had planned.”

There is also the difficulty in distributing the vaccine shots.

The Pfizer-BioNTech vaccine needs to be stored at around minus 75 degrees and used within five days after thawing.

Municipalities in Kyoto Prefecture expressed worries about whether they can properly store the vaccine in gyms that they plan to turn into vaccination sites when outdoor temperatures start rising in March and April.

The central government plans to distribute ultra-low temperature freezers for the vaccine to municipalities with populations of 35,000 or more by the end of February.

But that will leave out many local governments, including places that would have no easy access to the shots. The cities of Iki and Tsushima, for example, are both located on remote islands in Nagasaki Prefecture. Prefectural officials are weighing what to do for them.

The central government’s plan so far is to start vaccinating about 3.7 million health care workers in late February, followed by 36 million individuals aged 65 or older beginning in late March.

However, Taro Kono, the minister in charge of the vaccination campaign, said on Jan. 27 that elderly people will receive shots in April or later. That could mean other groups, such as those with underlying conditions and workers at nursing care facilities, will get the vaccine later than the earlier announced start in April.

Some local authorities are calling for flexibility. They say the COVID-19 vaccination schedule should be tailored to local needs, rather than run under a uniform nationwide guideline that prioritizes certain groups.

“Let us take a flexible response based on the local situation,” Fukuoka Mayor Soichiro Takashima said at a news conference on Jan. 26.