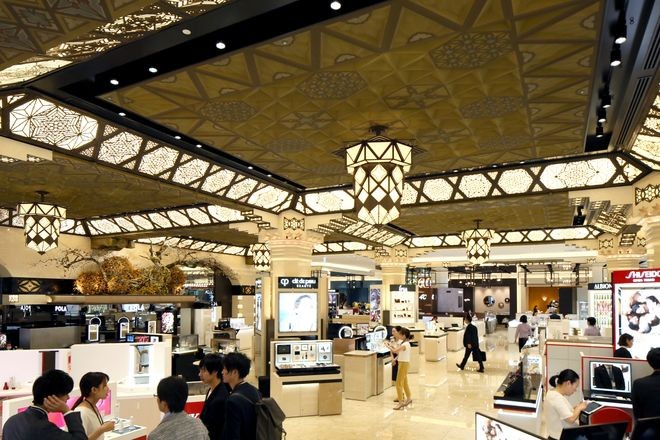 Cosmetics sales have plunged in the prolonged period of mask-wearing, but one product has provided a relatively stable source of revenue during the pandemic.

The already-intense competition in the wrinkle treatment industry is expected to heat up further during the COVID-19 crisis.

“We have received complaints from customers that they feel uneasy about the wrinkles around their eyes while donning masks,” said Miho Tanaka, an official of cosmetics maker Pola Inc. “Consumers appear to be increasingly troubled by and conscious of wrinkles.”

The frequent use of masks and the decline in overseas tourist numbers have led to a sharp drop in sales of lipsticks and foundation creams.

However, sales of beauty serum, skin lotion and other products that improve skin conditions have remained relatively steady, according to Tanaka.

One reason could be the rampant use of masks.

A Shiseido Co. survey in November last year noted that mask wearers make excessive use of the muscles around their eyes, leading to wrinkles.

Tanaka is involved in the development of Wrinkle Shot, Pola’s anti-wrinkle product that received its first upgrade in January.

Wrinkle Shot was put on sale in January 2017, after it was recognized by the health ministry as the first quasi-medicine agent with anti-furrow effects. Products in this category have milder impact on users than medical drugs.

Shiseido in June 2017 pitched a new product to compete with Wrinkle Shot and is looking to market a new cosmetic that doubles as skin whitener in March this year.

Pola estimates that sales of “wrinkle-improving cosmetics” have topped 200 billion yen ($1.93 billion) in the four years since Wrinkle Shot entered the market.

According to Pola, wrinkles are generated through faint skin inflammation caused by ultraviolet rays and pressure to make facial expressions. A substance developed by Pola is said to inhibit the activity of a wrinkle-developing enzyme that is produced excessively during inflammation.

Pola in 2002 started research on how wrinkles develop. It invested 1.5 billion yen over the 15-year period through the release of Wrinkle Shot.