Special 'nebuta' float created by 14 artisans on display in Aomori 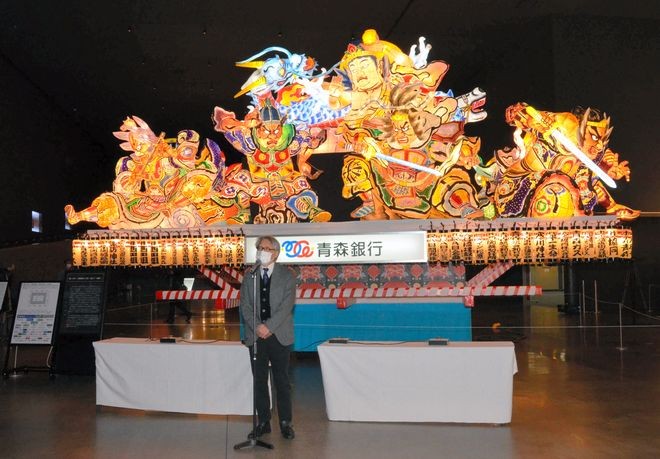 A special "nebuta" lantern float created as a collaborative effort by 14 local artisans is unveiled Dec. 23, 2020, at the Nebuta Museum Wa Rasse in Aomori. (Akihide Takezawa)

AOMORI--This year's Aomori Nebuta Festival will showcase a special "nebuta" lantern float featuring the collaborative work of 14 artisans after the event was canceled last August due to the novel coronavirus pandemic.

The massive float is on display at the Nebuta Museum Wa Rasse here until early August, after which it will take its place among other large floats to be paraded through the city's teeming streets.

The project was intended to provide an opportunity for nebuta artisans to show off their creative skills and support them financially in light of last year's festival cancellation.

The Aomori Tourism and Convention Association, the festival's secretariat, raised 35.46 million yen ($341,000) from individuals and companies in the city and elsewhere through a crowdfunding campaign to fund the project.

Measuring 8.5 meters wide, 6.8 meters deep and 5.2 meters high, the float dubbed "Negai no Hi" (Beacon of wish) features the Yakushi Nyorai Buddha, the monk Genjo Sanzo and the Twelve Heavenly Generals, images that portray hopes for an end to the pandemic so the festival can go ahead this year.

"Each figure is infused with the feelings of the nebuta artisans for this and in years to come," said Hidenori Nara, head of the association, during a ceremony held at the museum on Dec. 23. "Come what may, we want to hold (the festival) in 2021."

After the ceremony to commemorate the completion of the special nebuta, which will be lit up when it is paraded, Sakuryu Chiba, 73, the fifth-generation nebuta master, said: "Nebuta are only useful when they are moving. I really hope (the special nebuta) moves in a regal manner."