Probe sought into bullying of child with gender dysphoria 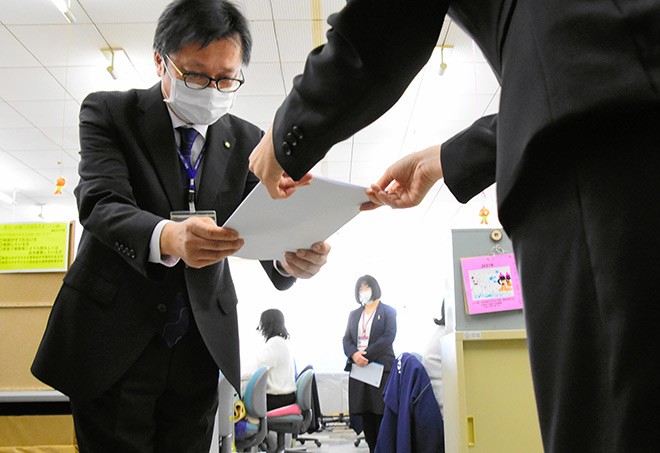 OTSU--The parents of a 6-year-old child diagnosed with gender dysphoria called on the city government to investigate the bullying she experienced at a municipal day nursery.

“Our child says she wants to die due to the bullying and has been unable to return to the day nursery,” the mother, 35, told a news conference on Feb. 4 after submitting a written complaint. “We want municipal authorities to prevent a recurrence of similar incidents.”

The parents said day nursery officials failed to appropriately deal with the bullying their child received from fellow pupils.

According to the complaint, the child is listed as a male on the family registry but identifies herself as a female.

The child was wearing female clothes and carrying belongings designed for girls after she entered the day nursery in April 2019.

The child was ridiculed by other pupils and was called “a liar” and “a ladyboy.” She was also beaten, and her belongings were damaged.

In November 2019, the pupil was diagnosed as having gender dysphoria, or a sense of mismatch between a person’s gender identity and social expectations of gender (assigned gender), accompanied by a strong displeasure or distress.

According to the mother, her child is suffering from symptoms of a round bald spot and adjustment disorder.

At the news conference, the mother pointed to the “wall of age” as a factor that had kept the bullying from being properly handled.

Under the Law for the Promotion of Measures to Prevent Bullying, bullying is defined as an incident that occurred at elementary or higher schools. Kindergartens and day nurseries are not covered by the legislation.

Tatsuya Ishida, a lawyer who represents the parents, said if students have refused to go to elementary or higher schools due to bullying, a third-party committee will investigate the case as a “serious incident.”

“Otsu has a standing committee of experts,” he told the news conference. “We expect the panel to review the case as a serious incident.”

The parents had sued the city government on Dec. 25 demanding their child’s information posted on its website without their consent, such as her sense of mismatch with her biological sex and her medical consultation with a doctor, be deleted.

They said the act constitutes a case of “outing,” or disclosing someone else’s gender identity or sexual orientation against their will.

However, the parents said Feb. 4 that they dropped the lawsuit on Jan. 28 because the day nursery’s evaluation report, which contained the pupil’s sensitive information, was removed from the website on Jan. 18, the day The Asahi Shimbun ran a story on the case.

The fiscal 2019 evaluation report described the pupil’s case under anonymity and referred to her as “a 4-year-old who entered the day nursery this fiscal year.”

Still, the mother recalled that she thought that her family could no longer live in Otsu, the capital of Shiga Prefecture, because only a few 4-year-olds entered the day nursery in fiscal 2019, which began in April 2019.

“We will take the parents’ sentiment seriously and consider (a review of the bullying),” Kazuhiko Inui, chief of the city government’s infant policy division, which oversees day nurseries, said after receiving the complaint on Feb. 4.

He also apologized for posting the pupil’s information on the municipal government website.

‘MAN IN BODY, WOMAN IN SOUL’

The child was about 3 when she began to say she was a girl. She yearned to wear her younger sister’s clothes. In her junior year, she attended a day care facility for a limited number of children, where she played in girls’ clothes.

After she entered the municipal day nursery, the pupil began to say things like, “I was called a ladyboy” and “I will die once to be reborn as a girl.”

A child care worker overseeing the class told the mother that the children were only “playing pranks” as part of their “growth process.”

The pupil started bursting into tears, not wanting to go to the day nursery. The parents made the rounds of psychiatrists in and outside of Shiga Prefecture until she was diagnosed with gender dysphoria.

At one time, a child asked her, “Why are you wearing those cute clothes?” When she said, “I am a man in body but a woman in soul,” the child called out, “You are a liar!” Other children continued saying the same thing to her, according to the mother.

At another time, the mother saw her child being punched in succession in the abdomen when she took her to and from the nursery. A child care worker only told the mother, “I will confirm the facts later.”

The mother and her child consulted with the city government’s anti-bullying measures promotion office in September 2020 after the pupil began to show physical health problems.

The infant policy division, as well as the day nursery, initially said what occurred among the pupils were part of their “growth process.”

However, the city government in November apologized to the parents in writing for failing to take sufficient measures against the bullying.

“We should have extended assistance a step further instead of trying to settle the matter with the mere remark saying that it occurred as part of the growth process,” the apology said.

Officials of the day nursery told The Asahi Shimbun that they exercised care for the pupil over the use of restrooms, the changing of clothes and other matters. They also said they set aside time for explaining gender diversity to children.

That said, the officials admitted there were some failings on their part.

No small number of people experience a gender mismatch in early childhood.

Mikiya Nakatsuka, a professor of health sciences with Okayama University who has seen people with gender mismatch problems for more than 20 years, said about 60 percent of the 1,200 or so people who consulted his clinic had first become aware of their mismatch before elementary school age.

Kazuya Kawaguchi, a professor of sociology with Hiroshima Shudo University who is well-versed in issues of sexual minorities, said, “Children are influenced by prejudices on the part of their teachers and parents. There should be education for child care workers and parents as early as in the stage of day nurseries and kindergartens.”

Japanese society is wrestling with the issue of outing.

The Tokyo High Court said in November that outing amounts to a significant infringement on personal rights and privacy rights. The statement was part of the court’s decision on the case of a graduate student with Hitotsubashi University, who fell from a building and died in 2015 after a classmate exposed him as a gay man.

Touching on the issue of outing, Kawaguchi said, “More than a few cases of outing occur out of a conscientious willingness to ‘provide assistance.’ Private information on gender identity and sexual orientation should be handled extremely carefully.”

Aside from biological sex, gender identity and sexual orientation, there are social expectations of gender, such as manliness and womanliness.

A mismatch between biological sex and gender identity has traditionally been called “gender identity disorder,” but experts say it does not amount to a disorder or a disease. It will be called “gender incongruence” in an international classification of diseases of the World Health Organization that will take effect in 2022.