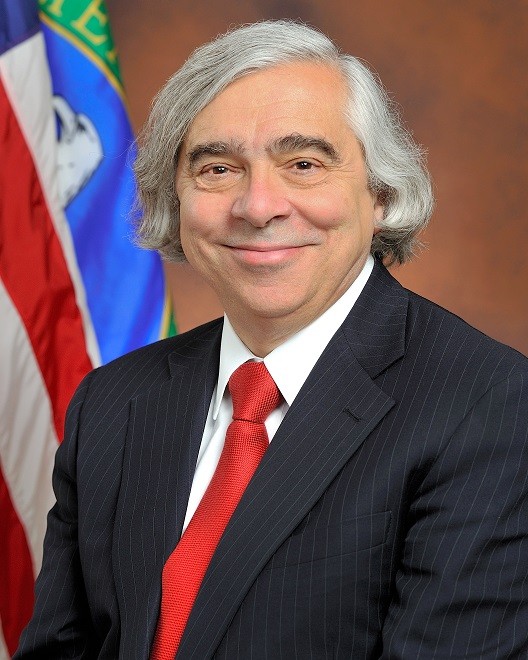 Ernest Moniz served as U.S. energy secretary between May 2013 and January 2017. (Provided by the U.S. Department of Energy)

A key official in the Obama administration in charge of nuclear security says the five major nuclear powers erred in refusing a seat at the table for discussions on a U.N. treaty to ban nuclear weapons.

Former Energy Secretary Ernest Moniz said he believes the five major powers made a mistake in not joining the talks that eventually led to the U.N. Treaty on the Prohibition of Nuclear Weapons (TPNW).

Moniz, a nuclear physicist at the Massachusetts Institute of Technology, served as energy secretary under then U.S. President Barack Obama between May 2013 and January 2017.

In an online interview with The Asahi Shimbun on Jan. 6, Moniz talked about the United States and the four other major nuclear powers skipping out on the TPNW discussions.

He said in his personal view the five powers “made a mistake in not being part of the ban discussions.”

He added that the ban treaty was “fundamentally consistent with the long-term goal” of the Nuclear Nonproliferation Treaty (NPT).

“I am hoping that if the United States and Russia make some of these gestures for heading in the direction of the eventual elimination of nuclear weapons, that it can reignite a dialogue between the nuclear and non-nuclear weapons states,” he said.

The nuclear powers did not join the discussions on the TPNW because they felt it was moving too quickly toward a total ban on nuclear weapons.

Those nations did not sign the treaty. Japan and other nations under the U.S. nuclear umbrella have also not signed the treaty, which took effect on Jan. 22 after 50 nations ratified the TPNW.

Moniz also talked about the resistance put up by Japan and South Korea when discussions arose during the Obama administration of declaring that the United States would not use nuclear weapons in a first strike on an enemy nation.

He said, “that discussion really came very, very late in the second term of the administration. It just didn't leave time for the kinds of discussions with our allies that one would need before making such a policy declaration.”

Moniz also said that Japan, as the only nation to have an atomic bomb dropped on it, could play a special role in serving as a bridge between the nuclear powers and non-nuclear nations.

Q: What is your view about the possibility of nuclear weapons being used today?

Moniz: The risks of the use of a nuclear weapon are higher now than at any time since the Cuban Missile Crisis (in 1962). We are living in a different cyber world, and certainly today let's say the United States and Russia, with over 90 percent of the world's nuclear weapons, we don't have any norms about cyber in nuclear command and control systems, in nuclear early warning systems. We've had no changes in the sole authority of the U.S. president on the use of nuclear weapons, and the person in charge has only 10 minutes to make a decision.

Q: What is your assessment of the nuclear security policy of the Trump administration?

Moniz: The Trump administration has elevated the role of nuclear weapons in our security posture. I think that was made probably the clearest with regard to the deployment of a so-called low yield weapon on nuclear submarines, which we think was completely unnecessary and reduces the threshold for use.

The Biden administration intends to go back to the situation where the role of nuclear weapons in our overall security posture is reduced.

Q: How do you view the moves regarding the New Strategic Arms Reduction Treaty (START) between the United States and Russia, which is set to expire on Feb. 5?

Moniz: We recommend that President Biden very early on agree to a New START extension, but simultaneously propose voluntarily a lower ceiling to invite Russia to do a reciprocal act. That's an example of something that at least goes in the direction also of the NPT obligations for continuing to work down the number of weapons.

The new administration should pursue with Russia the inclusion of discussions on non-strategic weapons. It is premature to be thinking about things like arms control agreements involving China.

That is not in the cards and probably doesn't make sense right now given the continuing asymmetry in the stockpiles. We think there are many things that could be done right now.

Q: When you were energy secretary during the Obama administration there was talk about the United States declaring a no-first-use of nuclear weapons pledge. Could you explain why that idea was eventually abandoned?

Moniz: I'm not going to go into too much detail about those internal discussions, but I think what is fair to say is that that discussion really came very, very late in the second term of the administration. It just didn't leave time for the kinds of discussions with our allies that one would need.

President Biden's emphasis on rebuilding alliances is so critical. We cannot unilaterally make some changes in our policy without having our Asian and European allies on board.

Q: It was said that Japan and South Korea opposed the first-use declaration. Could you elaborate?

Moniz: Japan and South Korea would have reasons to want to make sure that any move toward a (no-first strike pledge) was done in the context of the overall security relations, because the American security guarantees in the region remain very, very important.

Q: What is your view of the TPNW? Do you think the gap between that treaty and the NPT can be closed?

Moniz: I personally believe that the (five major powers) made a mistake in not being part of the ban discussions. I'm not saying that they should have said that it would be like an immediate ban, but the ban treaty after all is fundamentally consistent with the long-term goal of the NPT.

If the United States and Russia make some of these gestures for heading in the direction of the eventual elimination of nuclear weapons, it can reignite a dialogue between the nuclear and non-nuclear weapons states.

I think the decision made on the ban negotiations has made that harder rather than easier, which is why I think I would have recommended a different approach.

Q: What role do you think Japan should play between the nuclear powers and non-nuclear nations?

Moniz: I think Japan, obviously as the victim of nuclear weapons use, can play a special role, particularly as a strong friend and ally of the United States. I think it can play an important role in representing the non-nuclear arguments. I think Japan is stepping forward and that would be welcome. I think Japan has the standing to really be a strong voice in that discussion.

(Peter Loewi contributed to this story)