SUMO/ Spring tourney moved from Osaka to Tokyo due to pandemic 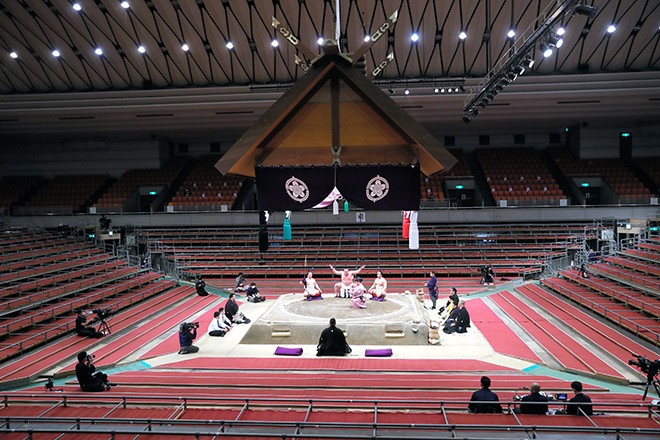 A yokozuna performs a ring-entrance ceremony at the venue without spectators on the first day of the Spring Grand Sumo Tournament in Osaka in March 2020. (Asahi Shimbun file photo)

With COVID-19 cases spiking across the nation, the Japan Sumo Association (JSA) on Jan. 28 decided to move the Spring Grand Sumo Tournament from Osaka to Tokyo.

The 15-day tournament will be held at Ryogoku Kokugikan in Tokyo instead of Edion Arena Osaka, the traditional spring venue.

The JSA board of directors cited the travel risk posed to large groups and the shorter preparation period for wrestlers.

The directors weighed the difficulty of taking the same COVID-19 preventative measures at Edion Arena Osaka as at Ryogoku Kokugikan.

According to the JSA, virus experts who visited the Osaka venue said, “It is difficult to do so.”

It plans to hold the spring tournament without changing the competition schedule from March 14 for 15 days with a reduced number of spectators.

The regular sumo tournament is held six times a year, and of the six, three are held outside Tokyo. However, the last tournament held outside the capital was the spring tournament in Osaka in March 2020, without spectators.

The July and November tournaments, which are traditionally held in Nagoya and Fukuoka, respectively, were also moved to Tokyo last year.

The sport has been rocked by the novel coronavirus pandemic.

Ahead of the New Year Grand Sumo Tournament, which concluded on Jan. 24, 65 wrestlers from four stables were forced to drop out after some members of their stables tested positive for the coronavirus.

Among those who tested positive was yokozuna Hakuho, who has won the Emperor's Cup a record 44 times.