Brother of hibakusha works for world free of nuclear weapons 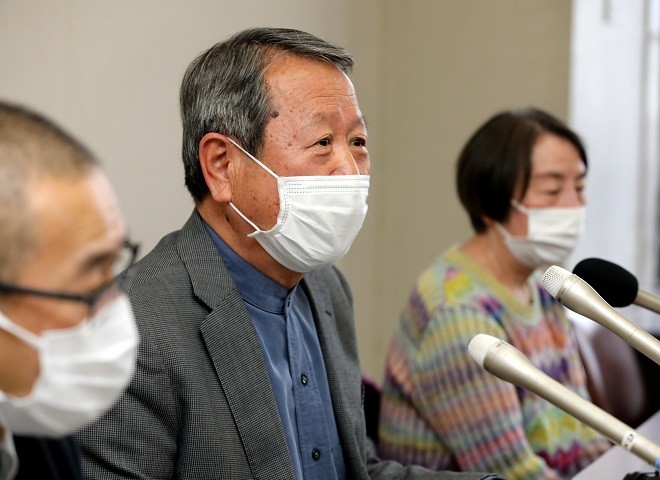 Yoshio Nagaoka, center, head of Kinoko Kai, speaks of the effectuation of the Treaty on the Prohibition of Nuclear Weapons at a news conference on Jan. 22 at Hiroshima city’s office in the municipality’s Naka Ward. (Jun Ueda)

HIROSHIMA--Yoshio Nagaoka never forgot the question his older brother once casually asked him: “What do you think it would be like if I had not been affected by the atomic bombing?”

His elder brother had microcephaly since birth. Their mother, Chizuno, was pregnant and near ground zero when the blast occurred on Aug. 6, 1945.

Today, Nagaoka, 71, touches on this story as he campaigns for the abolition of nuclear weapons.

“If they had not been exposed to the radiation in their mother’s wombs, they would have led completely different lives,” said Nagaoka in his statement at a news conference here on Jan. 22 about those living with microcephaly caused by the atomic bombings.

Nagaoka, a resident of Hiroshima’s Asa-Minami Ward, read out the statement as the head of the Kinoko Kai group of microcephaly patients and their families, demanding the Japanese government ratify the Treaty on the Prohibition of Nuclear Weapons (TPNW).

Hibakusha have been condemning nuclear weapons for their inhumanity, such as damaging even tiny lives that have yet to be born to the world, causing more victims who will develop serious disabilities.

As the TPNW went into effect to officially render nuclear weaponry illegal for the first time in history, hibakusha welcomed the move and renewed their determination to pressure Tokyo to support the pact.

OLDER BROTHER EXPOSED TO RADIATION IN THE WOMB

Nagaoka’s older brother, who is senior to Nagaoka by three years, currently lives alone in Hiroshima. Nagaoka goes to the home of the mentally troubled hibakusha sibling once every four days to assist him.

The brother cannot do simple calculations and always uses banknotes for payments, so his wallet is full of coins he received as change. Nagaoka pulls them out of the wallet and places bills inside instead.

When he spends time with his brother, Nagaoka also helps him wash his clothes and they enjoy a cup of coffee together.

Their mother was at her home, which doubled as a barbershop, 900 meters from the blast center at the time of the Aug. 6, 1945, nuclear attack by the United States.

She had just wound a patron’s hair with perm rods and received payment for the previous day’s service from another customer. The moment Chizuno returned to a place in front of a mirror stand, a blinding flash of light struck her.

Chizuno heard an explosive sound before she knew where it came from. She was thrown about 2 meters by the blast.

Half a year following the atomic bombing, Nagaoka’s elder brother was born with a significantly smaller body. He entered elementary school a year later than other children, and attended a special class for disabled students at junior high school.

Children develop microcephaly among other disabilities, primarily when they are exposed to radiation from atomic bombs in the womb in the early stages of pregnancy in the event that their mothers were near ground zero.

Many of the patients have problems in their brains or other parts of their bodies.

When Kinoko Kai was established mainly by the parents of microcephaly children in 1965, 20 years after the bombing, Chizuno became vice chair of Kinoko Kai.

As news reports came out about his mother’s active participation in the group’s programs, the older brother, who did not want to be looked at in a special way by others around him, shied away from the organization’s activity.

Despite that, Chizuno continued working mainly as an accountant calling for assistance for hibakusha. She visited a facility for disabled people outside Hiroshima Prefecture and reached out to authorities to obtain their support.

Records of Kinoko Kai’s activities explain the mother’s strong motivation. Chizuno was concerned about the possibility of her son being “seen as troublesome after growing up to be an adult” and “what would happen to him after we (his parents) die.”

Chizuno wrote, “I want to live longer than my boy, even though it might be only an hour or so.” After serving for 30 years as the second head of Kinoko Kai, Chizuno passed away in 2003 at the age of 80.

Nagaoka somehow felt distant from Chizuno and was not involved in the group’s projects. But as no one had shown up for six years as its head until 2009, Nagaoka was asked by supporters at the group’s secretariat to become chairman.

NAGAOKA GETS INVOLVED TO HELP BROTHER, OTHERS

Inspired by her anger against unreasonable damage from atomic bombings and the merciless government, Nagaoka began thinking that he should do anything he could do to help his brother and others who were forced to bear heavy burdens by the nuclear attacks, which they had done nothing to deserve.

Nagaoka thus described the Japanese government’s opposition to the TPNW as unforgivable, because Tokyo knows all too well that many are still struggling with microcephaly caused by the atomic bombings.

The Atomic Bomb Casualty Commission, set up by the United States in Hiroshima and Nagasaki, which is now known as the Radiation Effects Research Foundation, quickly found that children had microcephaly in its research on in-womb radiation exposure that started in 1951.

But the fact was long covered up, before news reporters and others in Hiroshima discovered the presence of microcephaly patients and brought the issue to the surface.

According to Japan’s health ministry, there are 17 state-designated hibakusha with microcephaly nationwide as of the end of March 2020, including one who died in November last year.

In his statement, Nagaoka lambasted the existence of nuclear weapons.

“Nuclear weaponry is not a mere powerful bomb,” said Nagaoka. “The weapons are devilish ones unparalleled in mankind’s history that damage human cells on a genetic level.”

He continued, “Intellectually disabled hibakusha suffering from microcephaly do not raise their voices for nuclear abolition through their own mouths. But their existence itself represents the inhumanity of nuclear weaponry.”

Hearing his brother’s what-if question, Nagaoka said he could find no words to say in response.

The preamble to the TPNW states the parties to the pact are “cognizant that the catastrophic consequences of nuclear weapons … have a disproportionate impact on women and girls, including as a result of ionizing radiation.”

“It (nuclear weaponry) causes damage to even small lives in uteruses,” said Nagaoka. “Peace cannot be protected through use of such a weapon.”