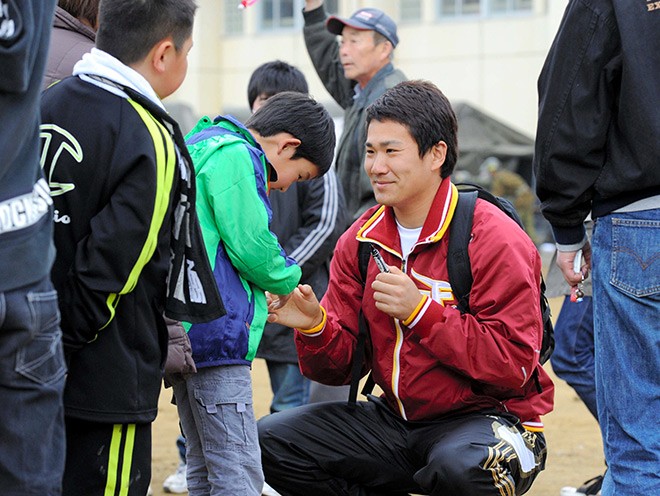 Masahiro Tanaka, who has signed with his former team, the Rakuten Eagles, greets children at an evacuation center in Higashi-Matsushima, Miyagi Prefecture, on April 8, 2011, in the aftermath of the Great East Japan Earthquake, tsunami and nuclear disaster. (Asahi Shimbun file photo)

SENDAI--For Tadatsugu Tamura, the owner of popular “oden” restaurant here, the news of Masahiro Tanaka's signing with the Rakuten Eagles couldn't come at a better time for a region hungry for good news.

“There is no better feeling than this!” Tamura, 77, said, echoing the cheer heard across Tohoku region.

The breaking news that Tanaka, 32, is coming home to pitch for Sendai-based Eagles after starring for the New York Yankees for seven seasons rocked baseball fans around Japan.

Tanaka's planned return has already boosted spirits in Sendai, the largest city in the Tohoku region, ahead of the 10th anniversary of the Great East Japan Earthquake, tsunami and nuclear disaster that occurred in March 2011.

The regional economy is still recovering from the disaster and has been further battered by the raging novel coronavirus pandemic.

Tamura is also a fixture at the ballpark. Along with other merchants in Kokubuncho, he has organized and led a private cheering squad for the Eagles, called Inatora Ouendan.

Tamura’s restaurant is a beloved baseball shrine with wall-to-wall sports memorabilia, including Tanaka’s glove on display.

“He never acted high and mighty when he was here,” Tamura said about the young ace.

Tanaka immediately posted a picture of the hot pot with pounded rice on a stick on his social media account with the comment, “My very first kiritanpo.”

Tamura remembers the moment just like it was yesterday.

Another unforgettable moment for Tamura was the deciding Game Seven of the 2013 Japan Series.

Rakuten was leading the Yomiuri Giants 3-0, seeking to clinch the team's first championship.

It all came down to the top of the ninth inning. Tanaka was on the mound with two outs, with the game-tying runners on first and third.

Tanaka struck the batter out, and the rest is history. The disaster was still heavy on local people’s hearts back then, but the championship put a smile on everyone's faces.

“It was all doom and gloom back in those days,” Tamura recalled.

But the championship run and Tanaka’s gutsy performance, including his 24 consecutive wins from the season opener, “were comforting and encouraging us spiritually,” Tamura said.

Tanaka’s second act with the Eagles could bring another big boost to the community, Tamura said.

His restaurant has been forced to close early since the end of December because of the third wave of the pandemic. Sales have plunged to 20 percent of normal times.

“I want to do that ‘one more strike!’ big chorus again with everyone,” Tamura hopes.

Tamura's sentiments were shared by many others in Sendai.

“I’m so glad,” said Fukuko Sato, 74, a resident of Sendai’s Miyagino Ward, reacting to the news of Tanaka's signing with a smile.

She said she went to watch the Eagles’ victory parade in 2013.

“I was very encouraged by him in the aftermath of the disaster,” she said. “I wish him success and hope he will pile up many strikeouts again.”

Fans who have followed Tanaka from when he was a standout in the national high school baseball tournament fondly call him, “Ma-kun.”

Maki Hiraga, 54, a company employee, said, “Ma-kun coming back will generate a lot of spark in Sendai.”

Mikihito Sato, 19, a vocational school student, was surprised by a coincidence in that his wish came true.

“I was just talking with my friend about Ma-kun, and said, ‘If he comes back, I’m sure Rakuten will win the championship again.

“I was surprised by the news, and I’m cheering for him,” Sato added.

Kazuhisa Ishii, the Eagles’ skipper who also serves as the team's general manager, on Jan. 28 said at an online news conference announcing the signing of the coveted free agent, “I am relieved and it is encouraging.”

Tanaka “is a special piece (of the puzzle), a valuable player, for winning a championship,” said Ishii, a former NPB pitching star himself, who also pitched four seasons in the major leagues.

Tanaka left NPB to pursue his major league dream, but he has always returned to Sendai during the off-season to train at one of the Eagles’ facilities.

Ishii said that Tanaka was aware that the upcoming season will be special to the team and fans because it falls on the 10th anniversary of the disaster and helped persuade him to return home.

“He knows very well that the fans who helped him grow are in the Tohoku region. His desire to play for them again was the biggest factor, I believe,” Ishii said.

Tanaka is expected to join the Eagles during spring training, which opens in February. His Twitter account has been flooded with well wishes from fans in anticipation.

“Thank you for coming back!” one wrote. “I’m so happy and almost crying,” another fan posted.

“We are waiting for you in Sendai!”

(This article was compiled from reports by Sakiko Kondo, Mitsumasa Inoue, Shinjiro Omiya and Ken Murota.)