A first for Japan, an intact fossil of a firefly from 3.5 million years ago 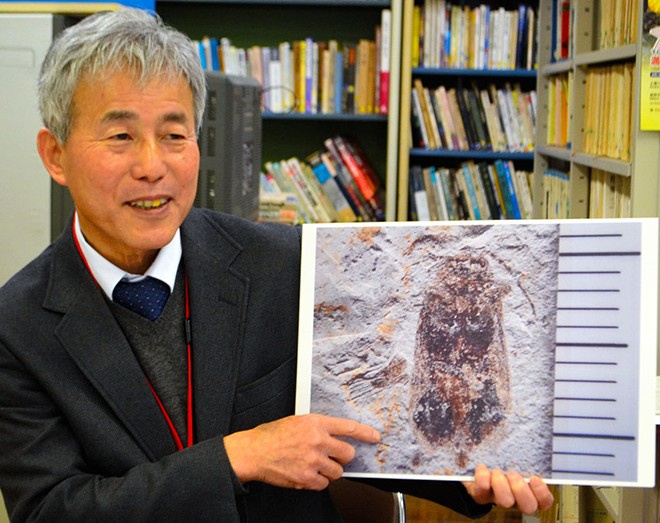 Yoshikatsu Nakamura, director of the Shimonita Museum of Natural History, displays a panel with an enlarged image of the fossilized firefly. (Takuro Noguchi)

SHIMONITA, Gunma Prefecture--A fossil rarity, a firefly from about 3.5 million years ago, was found in a geological formation that straddles Gunma and Nagano prefectures in central Japan.

It is the first fossilized firefly discovered in Japan, said officials of the Shimonita Museum of Natural History here on Jan. 28, noting that only seven species of fireflies have been found in fossilized form across the world.

“It is extremely rare for insects to be preserved as fossils because they are typically eaten or decay after they die,” Toshiaki Tanaka, 66, a key member of a study group, told The Asahi Shimbun.

The fossil is of a 1.1-centimeter-long male firefly lying face up. Experts identified it as being closely related to Cyphonocerus ruficollis, one of the 50 or so firefly species that inhabit Japan today, based on the shape of its copulatory organ and other features.

It was discovered by Iichi Moteki, a local schoolteacher who is now deceased.

Records kept by Moteki show that he found it in a geological formation of sediment of a long-gone crater lake at an elevation of about 1,100 meters at Mount Kabutoiwayama along the border with Nagano Prefecture.

A swath of land in the area, extending roughly 5 kilometers on each side, has produced a treasure trove of fossilized plants and insects, officials said.

The firefly is one of the 250 pieces of fossilized insects, including flies and a dragonfly, that Moteki collected over about four decades. Moteki’s family donated the collection to the museum in 2011 following his death in September 2010.

The museum set up a study group in 2016 to scrutinize the fossils in his collection.

“The insects in the collection were probably preserved whole because they were enveloped in a thick layer of volcanic ash on the lake bottom and were protected by a body of lava that flowed onto it,” said Yoshikatsu Nakamura, a geologist and director of the museum.