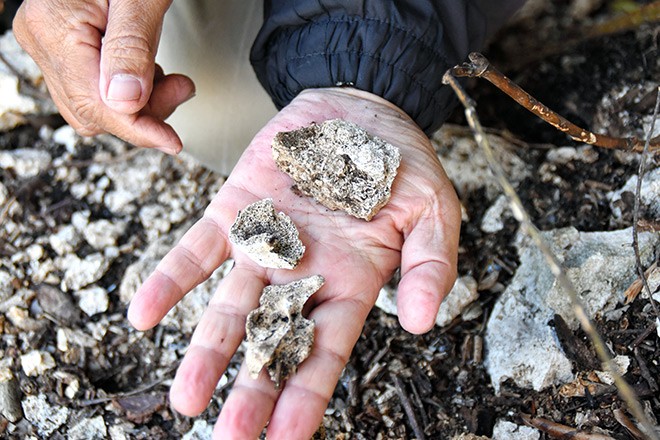 Takamatsu Gushiken explains that the fragment in the middle is human bone while the two other pieces in his hand are limestone. (Shinichi Fujiwara)

Disturbing signs are emerging that human remains from the ferocious 1945 Battle of Okinawa might be mixed with soil landfill for a massive reclamation project for a U.S. military base in the nation's southernmost prefecture.

The battle that marked the U.S. invasion of the main islands of Japan left about 200,000 Japanese and Americans dead. It is estimated that a quarter of Okinawa's civilian population perished in the conflict.

Seventy-six years after the end of the fighting, Okinawa prefectural authorities estimate that the remains of about 2,790 people remain buried and unaccounted for.

Volunteers who have spent decades trying to uncover human remains and identify the deceased are now concerned that dirt and soil from areas where people fell or committed suicide are being used for contentious land reclamation work off the coastal Henoko district of Nago in Okinawa Prefecture.

The reclamation project, a years-long undertaking bitterly opposed by the majority of Okinawans angered at shouldering the burden of hosting 70 percent of all U.S. military facilities in Japan, is aimed at relocating the U.S. Marine Corps Air Station Futenma in Ginowan, also in the prefecture.

Takamatsu Gushiken is a member of Gamafuya, a group of volunteers who search for remains of the war dead. The word "gamafuya" from the Okinawan dialect means people who dig caves.

Gushiken, 66, began his quest nearly 40 years ago. He often visits caves in the southern part of the main Okinawa island in search of remains because that is where Imperial Japanese Army troops and local civilians were cornered by U.S. forces.

Countless civilians chose or were ordered to commit group suicide rather than be captured by the enemy. Many people did so by huddling together and pulling the pin on a grenade.

Gushiken began visiting a cave in a forested area of the Komesu district of Itoman last September after he came across a cave that had apparently gone undetected before. In addition to bullet fragments and saw blades, he found a jawbone with teeth attached.

After contacting the local police and confirming the discovery likely dated from the war era, Gushiken turned over his findings to the prefectural government.

But he encountered a surprise in early November when returning to the area because much of the land, including the forested area, had been cleared. There was even a sign stating that the area was now a quarry.

Until then, Gushiken had never encountered heavy machinery being used to dig up soil and dirt when he returned to a site where remains had been found.

He began to harbor an uneasy feeling that dirt from the area mixed with remains of war dead may be heading to the Henoko land reclamation site.

In April 2020, the Defense Ministry submitted a request to the Okinawa prefectural government for a change to the reclamation plan due to the soft seabed off Henoko, which needed shoring up for the project to continue.

In its application, the ministry for the first time proposed that the southern part of the main Okinawa island might be one area from where dirt and soil could be gathered for land reclamation work.

It stated that around 20.18 million cubic meters would be needed and that it was possible to obtain 2.2 times that volume from within Okinawa. The ministry also noted that about 31.6 million cubic meters could be gathered from the municipalities of Itoman and Yaese in the southern part of the island, which is renowned for its quality limestone.

There are 19 quarries in the area, according to the Okinawa General Bureau, which approves sites for use as quarries.

The huge volume of dirt and soil needed for the Henoko project has triggered concerns that some companies would begin digging up uncleared land without checking whether war dead remains may still be buried there.

The president of the company that began clearing the land where Gushiken discovered the cave admitted that approval to develop the forested area was only obtained in September.

He said that if there was demand for dirt and soil for the Henoko project, his company wanted a slice of the action.

It never occurred to him that war remains might be buried in the area where his company is mining. He promised to cooperate with efforts to collect any remains and pray for the war dead.

In 2016, a law went into effect that stated it was the central government's responsibility to collect the remains of military personnel and civilians who perished in World War II.

In November, a group of about 500 family members who lost loved ones in World War II submitted a request to Prime Minister Yoshihide Suga asking that dirt and soil from the southern part of the island not be used at Henoko.

An official with the Okinawa General Bureau explained there were no procedural matters to ensure that the possibility of war remains in an area be considered when deciding whether or not to approve a site as a quarry.

Kazufumi Hamai, an associate professor of modern Japanese history at Tokyo’s Teikyo University, pointed to a mix-up among war remains discovered in Siberia. Even though welfare ministry officials were aware that some of the remains returned to Japan were not of Japanese, they did nothing to address the problem.

“The welfare ministry must make even more detailed efforts to grasp and preserve areas where war remains might be found as well as appraise the remains that are uncovered,” Hamai said.

If dirt and soil from the southern part of the island must be used at Henoko, he said every effort should be made to ensure that no war remains were included in whatever was delivered to Henoko.