Tanaka says his return to Japan team is no ‘stopgap’ deal 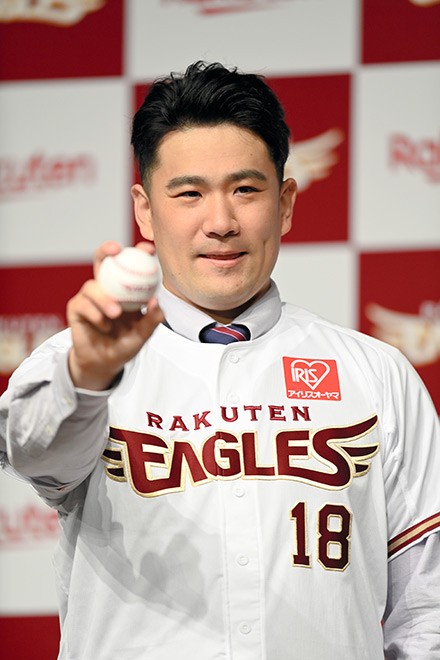 Masahiro Tanaka, who announced his return to the Rakuten Golden Eagles, poses for a photo in Tokyo on Jan. 30. (Shinnosuke Ito)

Right-hander Masahiro Tanaka is in a showoff mood these days, having rejoined the Rakuten Golden Eagles after a seven-year break to pitch for the New York Yankees.

Tanaka, who became a free agent after completing his tenure with the Yankees, said he can't wait to show his fans how much he has developed since he left Japan and his original club.

Tanaka said he picked the Rakuten Eagles despite offers from U.S. Major League and other teams after giving much thought to the kind of baseball he wants to play and the new environment he will face.

“I do not regard this as a stopgap arrangement,” he said, referring to the two-year contract with the Rakuten Eagles. “I am determined to lead the team to become the champion in the Japan Series.”

In his last year with the Rakuten Eagles, Tanaka helped the team win its first championship in the Japan Series.

His return to his original club coincides with the 10th anniversary of the earthquake and tsunami disaster that ravaged northeastern Japan, something that has great significance for him.

His club is based in Sendai, Miyagi Prefecture, one of the hardest-hit parts of the Tohoku region.

“There may be more things I can do to inspire people by being closer to them than I was,” he said. “I will make steadfast efforts to put in a good performance on the ground.”

Tanaka said he will gladly play for the Japanese national team for the Tokyo Olympics this summer if he is selected.

“There is no reason to refuse,” he said. “I was disappointed (by finishing with a fourth place) in the Beijing Olympics. I want gold.”

He decided not to join his club’s spring camp for the time being, opting to train by himself.

Tanaka said he decided to play for the Rakuten Eagles again while he is still in top form, rather than at the end of his professional career.

Asked whom he wants to pitch against in the Pacific League, Tanaka said: “A slew of good batters came along while I was away from Japan. I look forward to throwing against them.”