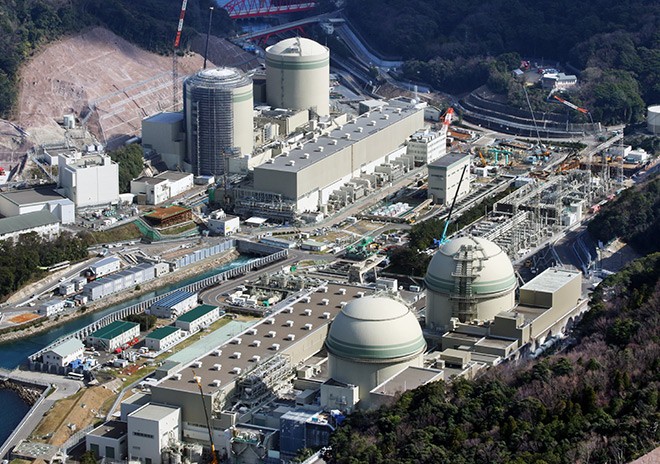 The No. 1 and No. 2 reactors, seen in the background, at Kansai Electric Power Co.’s Takahama nuclear plant in Takahama, Fukui Prefecture, in November 2020 (Asahi Shimbun file photo)

Following the mayor's green light, the attention now shifts to whether Fukui Governor Tatsuji Sugimoto will embrace the restart of the reactors, which have exceeded their lifespans.

The Takahama plant is operated by Kansai Electric Power Co., which is seeking to bring the two reactors back online in March or later.

After the 2011 Fukushima nuclear disaster, Japan introduced a new rule to limit the lifespan of reactors to 40 years after they went into service.

But the rule also states that reactors can resume operations for up to 20 more years as an exceptional step if it is deemed that they are needed to prepare for a possible shortfall in power supply.

The mayor’s approval was another hurdle Kansai Electric had to clear after the Takahama town assembly endorsed the plant’s continued operations in November.

The Fukui governor urged the Osaka-based utility to present a candidate site for an interim storage facility by the end of 2020 where spent fuel from the nuclear plants in the prefecture will be kept.

Sugimoto insisted that the site must be located outside his prefecture.

He said he will weigh whether he will approve the reactors' restart only after the company meets his request.

But Kansai Electric has yet to do so.

The Federation of Electric Power Companies of Japan, an industry group made up of 10 leading power companies, said in December that they were considering the joint use of an interim storage facility for spent nuclear fuel in Mutsu, Aomori Prefecture.

Tokyo Electric Power Co. and Japan Atomic Power Co. jointly invested in the Mutsu facility to store spent fuel from their plants. They plan to start the operation of the facility in fiscal 2021.

The federation's announcement aims at helping Kansai Electric move toward restarting the Takahama plant, according to nuclear industry officials.

Kansai Electric also plans to resume operating the No. 3 reactor at the Mihama nuclear plant in Mihama, Fukui Prefecture. The Mihama town assembly announced its backing for the restart in December. The reactor, with a 0.826-gigawatt output capacity, went online in 1976.

Mihama Mayor Hideki Toshima, is expected to announce his position on the restart next month.