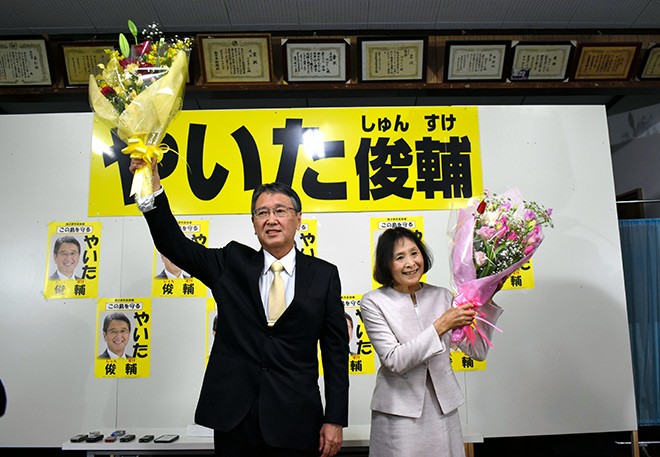 Nishinoomote Mayor Shunsuke Yaita and his wife celebrate on Jan. 31 after learning that he was re-elected in the city in Kagoshima Prefecture. (Satoshi Okumura)

NISHINOOMOTE, Kagoshima Prefecture--An independent incumbent narrowly won re-election as mayor on Jan. 31 on a campaign to block the central government’s plan to relocate a training site for U.S. carrier-based aircraft to the island community.

Although the victory of Shunsuke Yaita, 67, alone will likely not affect the central government’s plan, it could spread opposition against the project to the prefectural government level.

Yaita defeated Kiyonobu Fukui, 71, who heads the city’s chamber of commerce and industry and ran as an independent but was backed by the Liberal Democratic Party.

The main issue in the election was the project to set up a Self-Defense Forces facility on Mageshima island, which is part of Nishinoomote, that will serve as a relocation site for U.S. military landing practices from Iwoto island, also known as Iwojima, south of Tokyo.

As mayor, Yaita has strongly opposed the plan.

People in Nishinoomote “have too much to lose” if they accept the SDF facility and the relocated training site for field carrier landing practices, he has argued.

Yaita celebrated the victory with his supporters at a community center on the evening of Jan. 31, and described the election as a referendum on the relocation plan.

“I will discuss with the central government to find a solution,” Yaita said.

In the previous mayoral election, where six candidates ran, turnout was 77.26 percent. All six failed to win the required minimum number of votes. Voter turnout in the runoff, won by Yaita, was 71.65 percent.

Fukui, who supports the relocation plan, argued that the city’s economy would be bolstered by hosting SDF members, building a base and receiving grant money related to the training and the facility.

Local industry organizations, including those for commerce, construction and fisheries, actively supported Fukui’s bid to become mayor, but they fell short of Yaita’s grass-roots campaign supported by his former classmates.

“I will pursue to build a city whose economy does not rely on a base,” Yaita said.

The central government, however, has shown no signs of slowing down construction of the SDF facility.

The Defense Ministry will soon conduct an environmental impact assessment to check if noise caused by the construction and the flight training would affect the natural habitat.

The ministry has already started the bidding processes for designing an airfield and a port facility at the site, as well as for construction of peripheral roads.

The city government has recognized that it “does not have the authority to stop the project.”

Kagoshima Governor Koichi Shiota has yet to reveal his stance on the Mageshima plan.

But Shiota said at a January news conference before the mayoral election: “Mageshima will be a major election issue and a barometer of public opinion. I will set the prefectural government’s stance based on the (election result).”