Komeito member to resign from Diet over Ginza nightclub visit 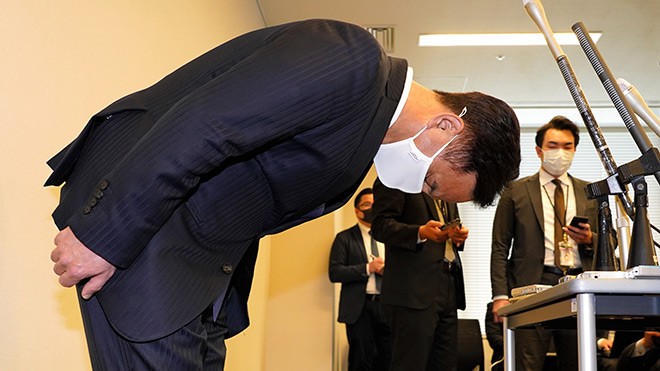 A senior member of the ruling coalition’s junior partner, Komeito, offered to resign from the Diet after coming under fire for visiting a club in Tokyo’s upscale Ginza district late at night during the state of emergency.

Kiyohiko Toyama, a former vice finance minister, stepped down as the party’s acting secretary-general on Jan. 29 over the scandal and submitted his official letter of resignation for his Diet seat on Feb. 1 through his secretary to Lower House Speaker Tadamori Oshima.

He had visited the nightclub despite the government's urging of the public to avoid nonessential outings and asking businesses to close early to contain the COVID-19 pandemic.

“I’m truly sorry for significantly undermining public trust in politics,” Toyama told reporters at the Diet building on Feb. 1. “I have no intention of running in the next (Lower House) election.”

He also revealed on Jan. 29 that a fund management organization he headed paid about 110,000 yen ($1,050) so he and his secretary could go wining and dining at three hostess clubs and a “snack” bar. Toyama said revised political fund reports were submitted to the internal affairs ministry the same day.

Toyama, 51, hails from Chiba Prefecture. He was first elected to the Upper House in 2001. After serving two terms, he ran in a Lower House election and won a seat in the Kyushu proportional representation bloc. He is currently in his fourth term in the Lower House.

His resignation came as three members of the ruling Liberal Democratic Party on Feb. 1 expressed their intentions to leave the party following revelations that they also visited Ginza clubs in January despite the ongoing state of emergency.

Jun Matsumoto resigned as acting chairman of the LDP’s Diet Affairs Committee on Jan. 29 after an online magazine reported his club visit.

It was later revealed that he was accompanied by Takashi Otsuka, a deputy chairman of the party’s Diet Affairs Committee, and Taido Tanose, vice minister of the Ministry of Education, Culture, Sports, Science and Technology.

The three members met with Toshihiro Nikai, the LDP’s secretary-general, on the afternoon of Feb. 1 at the party’s headquarters. The three told reporters after the meeting that Nikai had recommended they leave the party. They also said they handed in their resignation notices to the party.

"This is a matter of grave concern because they threw a party under the state of emergency and kept it secret," Jun Azumi, the chairman of the main opposition Constitutional Democratic Party of Japan's Diet Affairs Committee, told reporters following reports of the three members' intentions to resign from the LDP.