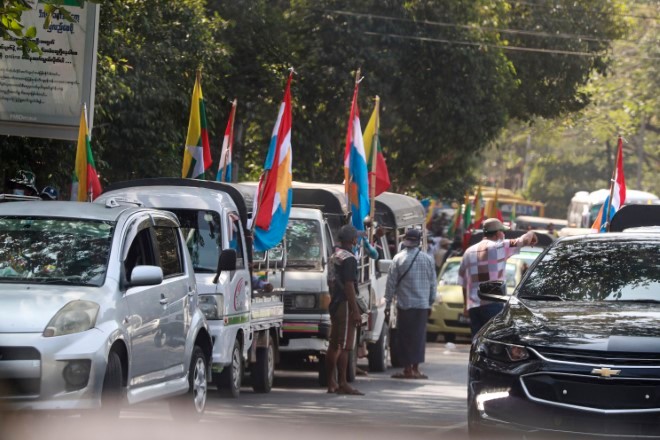 Supporters of the Myanmar military gather near trucks adorned with the military flag, a Buddhist religious flag and a national flag on Feb. 1, in Yangon, Myanmar. (AP Photo)

BEIJING--China said on Monday it had “noted” the military coup in Myanmar and hoped that all sides could properly manage their differences under the constitution and uphold stability.

“We have noted what has happened in Myanmar and are in the process of further understanding the situation,” Foreign Ministry spokesman Wang Wenbin told a daily news briefing in Beijing.

“China is a friendly neighbor of Myanmar’s. We hope that all sides in Myanmar can appropriately handle their differences under the constitution and legal framework and safeguard political and social stability,” he added.

Asked whether Myanmar had hinted there could be a coup during Wang Yi’s visit, or whether China would condemn the coup, spokesman Wang reiterated his previous statement.

China has long played an important role in the former Burma, standing by the country during its previous time as a military dictatorship, but also working closely with Aung San Suu Kyi when she became leader.

Nobel laureate Suu Kyi has been detained along with other leaders of her National League for Democracy (NLD) party in early morning raids.

China has strategic economic interests in Myanmar, with major oil and gas pipelines running through the country.

China is also pushing the China-Myanmar Economic Corridor, a network--some of it existing and some planned--of transport and other projects passing through areas where ethnic minority factions often battle each other and government forces.

Fighting in northeastern Myanmar sometimes sends refugees fleeing over the border into China, to Beijing’s anger.