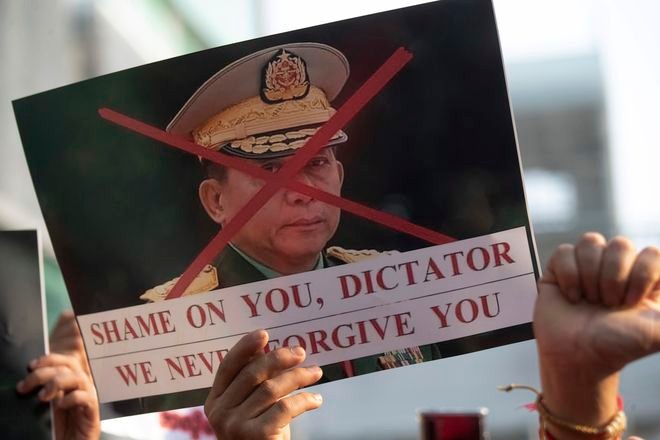 A Burmese living in Thailand holds a picture of Myanmar military Commander-in-Chief Senior Gen. Min Aung Hlaing during a protest in front of the Myanmar Embassy in Bangkok, Thailand, on Feb. 1. (AP Photo)

The military coup in Myanmar is an outrageous act that trampled on the will of the people.

The international community, including Japan, should make every diplomatic effort possible to pressure the military to undo its action.

Myanmar’s military seized power in a Feb. 1 coup and declared a national state of emergency for one year. The legislative, administrative and judicial powers were transferred to the commander-in-chief of the armed forces.

The coup occurred on the day when the country’s parliament was scheduled to hold its first session since general elections in November to form the new government. The democratic process was brutally disrupted by the armed forces in a totally unacceptable power grab.

In the November poll, the National League for Democracy (NLD), led by State Counsellor Aung San Suu Kyi, won a landslide victory, securing more than 80 percent of the contested seats. Aung San Suu Kyi was certain to be re-elected as the nation’s de facto leader.

But she was detained along with other senior members of her party. Aung San Suu Kyi, the symbol of the country’s pro-democracy movement, who engaged in academic research in Japan during the 1980s, is now 75 and her health is a concern. The military should immediately release all the political leaders it has detained.

The military-backed Union Solidarity and Development Party (USDP) took a drubbing in the November poll and the military has disputed the election results, claiming that there were many cases of voter fraud, such as duplicate registrations.

But the military’s allegations of election fraud are clearly a mere pretext for forcefully seizing power. An international election monitoring organization concluded that the election was fair.

After nearly a half century of oppressive military rule, the Southeast Asian nation shifted to a civilian government 10 years ago.

But the ruling junta drafted a Constitution that allocates a quarter of the seats in parliament to the military and allows army generals to retain control of the country’s most powerful ministries.

The NLD, which came to power in an 2015 election, tried to reform the system, but its efforts were thwarted by the military. But the party expanded its strength in the legislature in the poll last year, while the opposition USDP suffered a resounding defeat.

The military apparently fears a decline in its power and has said a fresh election will be held. But that would only mean an end to the nation’s progress toward democracy.

What the military is doing is an imprudent act that will only antagonize the people further and create serious confusion in the country.

There have been a series of developments in recent years that signal the waning of democracy in Southeast Asia. Thailand has also been hit by a military coup, while Cambodia’s main opposition party was disbanded by the country’s Supreme Court.

Behind these developments has been the growing influence of China, which offers lavish aid to nations in the region without paying attention to situations concerning human rights and democracy in the recipient nations.

Chinese President Xi Jinping visited Myanmar last year, marking the first trip to the country by a Chinese leader in 19 years. The two countries have a close relationship as indicated by their agreement to build a “Sino-Myanmar Community of Common Destiny” as well as expand bilateral economic cooperation.

While major Western democracies imposed economic sanctions on Myanmar, Japan tried to encourage the nation to move toward democracy through economic aid and dialogue. But the latest military coup has laid bare the limitations of Tokyo’s “constructive engagement” strategy for dealing with the country.

The new administration of U.S. President Joe Biden, which was inaugurated in January, places great importance on promoting human rights and democracy in the world and is seeking to strengthen cooperation with U.S. allies. Both the United Nations and Western countries have been quick to denounce the coup.

Japan should emphatically make it clear that it will not overlook the attempt by Myanmar’s military to reverse the process of the country’s democratization and start making efforts to convince the military to stand down.