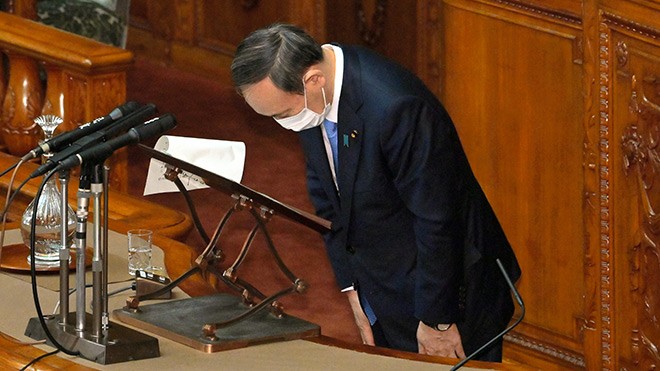 Prime Minister Yoshihide Suga has apologized to the public after three lawmakers from his own party visited two Ginza nightclubs during the state of emergency issued over the novel coronavirus pandemic.

“At a time when we were asking the public for their understanding and cooperation, politicians should have been serving as role models, but what occurred is unacceptable and extremely regrettable," Suga said on Feb. 2, during the Upper House plenary session. “I express my heartfelt apology to the public.”

Three members of the ruling Liberal Democratic Party visited Tokyo’s swanky Ginza district in mid-January, during the state of emergency in effect for the capital and 10 other prefectures. They all formally left the party on Feb. 1.

One of the three, Jun Matsumoto, had initially said he visited the nightclubs on Jan. 18 by himself. But it turned out that two of his LDP colleagues were with him the entire time.

They first went to an Italian restaurant and then later the nightclubs, despite that the government has been urging the public to avoid nonessential outings and asking businesses to close shop early to help contain the virus.

After media reports surfaced about Matsumoto going to the nightclubs, he resigned as acting chairman of the LDP Diet Affairs Committee.

One of the other lawmakers, Taido Tanose, was dismissed as senior vice minister of the education ministry, while the third member, Takashi Otsuka, resigned as a deputy chairman of the LDP Diet Affairs Committee.

Kiyohiko Toyama also resigned from his Lower House seat for visiting a separate nightclub. Toyama was a member of Komeito, the LDP’s junior coalition partner.

Suga said at the plenary session that he dismissed Tanose the previous day because not only did he wine and dine until late at night despite the state of emergency, but he also concealed that fact.

Suga said he would continue to make every effort to deal with the novel coronavirus pandemic.