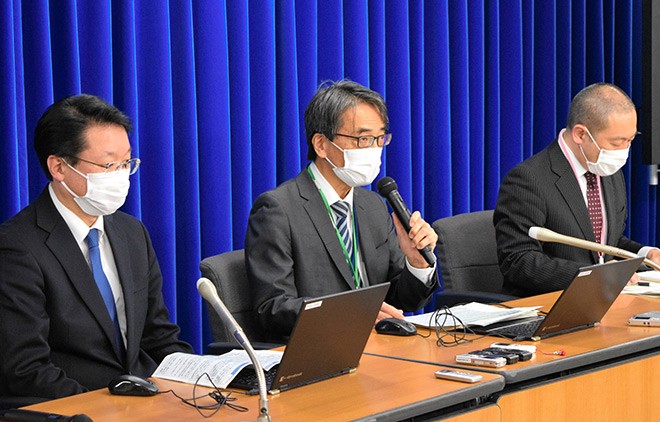 Takaji Wakita, head of the National Institute of Infectious Diseases, center, speaks at a news conference on Feb. 1. (Shuichi Doi)

The number of new COVID-19 cases has been on a downward trend since mid-January, but the ratio of elderly patients--those most at risk of serious symptoms--has risen, a health ministry advisory panel said.

The panel on Feb. 1 said the tallies of new infection cases over the past week in Tokyo and the surrounding prefectures of Saitama, Chiba and Kanagawa have decreased to 50 to 60 percent of their peak counts.

Takaji Wakita, head of the National Institute of Infectious Diseases who chairs the advisory panel, noted that the COVID-19 situation was particularly severe in the first half of January.

“Because of year-end dinner parties and homecoming visits, the number of infections skyrocketed regardless of age,” Wakita said. “The number has decreased since then, but we need to see if the trend will continue.”

One gauge of the COVID-19 situation is the effective reproduction number. If the figure is below one, it indicates that the number of new infections has declined.

As of Jan. 15, the effective reproduction number was 0.80 nationwide.

The figure was 0.79 in Tokyo and 10 prefectures under the state of emergency, and 0.84 in all other prefectures.

However, the number of patients with severe symptoms was a record-high 1,043 as of Jan. 26.

Health officials are concerned about the rising percentages of elderly COVID-19 patients.

According to data compiled by the health ministry, during the week from Jan. 3, people 60 years old and older accounted for about 20 percent of new COVID-19 patients, while more than 50 percent were 39 or younger.

But during the week between Jan. 17 and Jan. 23, people 60 or older accounted for around 30 percent of the total.

“Infections have not decreased among people who are in their 80s and 90s,” the advisory panel said, warning that the number of patients with severe symptoms as well as the number of deaths will likely increase.

The health ministry said 196 cluster infections were reported at elderly care facilities over the four-week period from Dec. 7 to Jan. 4. During the three-week period from Jan. 4, the number jumped to 253.

“The anti-virus measures have produced a certain effect, and the cases where people contract the virus from dining and wining have declined,” Wakita said. “Meanwhile, the number of infection cases at care facilities has been increasing a lot.”

A central government panel of experts dealing with the COVID-19 crisis uses a 4-stage system for six barometers to determine the novel coronavirus situation in a given area.

According to data compiled by the Cabinet Secretariat, none of the 11 prefectures under the state of emergency was in the most serious stage 4 level for all six barometers as of Jan. 28.

In Chiba Prefecture, five of the six barometers were at stage 4.

Yoshihito Niki, a visiting professor of infectious diseases at Showa University, said: “The effects of issuing the state of emergency have been seen, although slowly. But if the government lifts it hastily, people will become relaxed, leading to a fourth wave of the pandemic.”

He recommended waiting and checking the infection situation for at least another month.