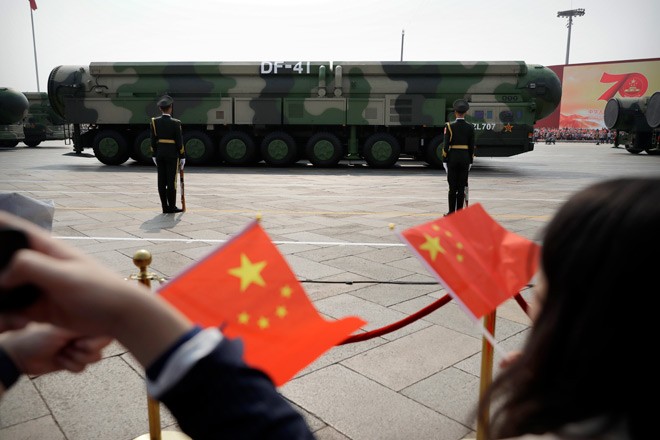 Spectators wave Chinese flags as military vehicles carrying DF-41 ballistic missiles roll by during a parade to commemorate the 70th anniversary of the founding of Communist China in Beijing on Oct. 1, 2020. (AP Photo)

BEIJING--China’s top diplomat called on Tuesday for Beijing and Washington to put relations back on a predictable and constructive path, saying the United States should stop meddling in China’s internal affairs, like Hong Kong and Tibet.

Yang Jiechi, director of the Central Foreign Affairs Commission of the Chinese Communist Party, is the highest-ranking Chinese leader to speak on China-U.S. relations since President Joe Biden took office.

Under the Trump administration, U.S. relations with China plunged to their lowest point since the establishment of diplomatic ties in 1979, as both sides clashed over issues ranging from trade and technology to Hong Kong, Taiwan and Xinjiang, and the South China Sea.

While reassuring the United States that China has no intention to challenge or replace the U.S. position in the world, Yang stressed that no force can hold back China’s development.

“The United States should stop interfering in Hong Kong, Tibet, Xinjiang and other issues regarding China’s territorial integrity and sovereignty,” Yang said, defining these as issues concerning China’s core interests and national dignity.

Speaking at an online forum organized by the National Committee on U.S.-China Relations on Tuesday in Beijing, Yang said China never meddles with U.S. internal affairs, including its elections.

Yang, whose position in the ruling Communist Party gives him more influence than even the foreign minister, also urged the Biden administration not to abuse the concept of national security in trade.

“We in China hope that the United States will rise above the outdated mentality of zero-sum, major-power rivalry and work with China to keep the relationship on the right track,” he said.

Yang reasserted that China is prepared to work with the United States to move the relationship forward along a track of “no conflict, no confrontation, mutual respect and win-win cooperation.”

The word “cooperation” appeared 24 times in his speech. He suggested that U.S. firms could gain from an estimated 22 trillion dollars’ worth of exports to China in the coming decade.