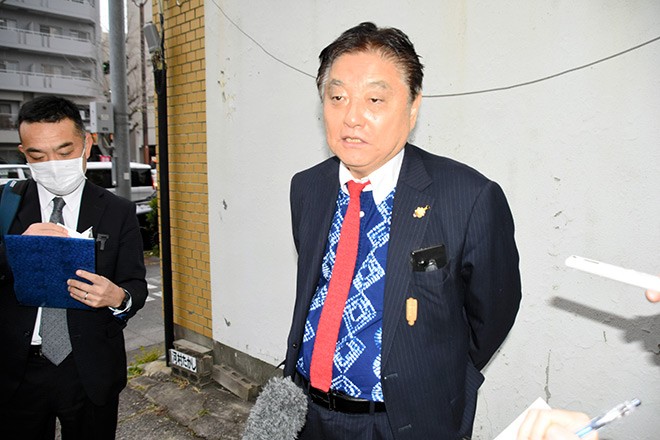 Nagoya Mayor Takashi Kawamura answers questions from reporters on Feb. 1 after the Aichi prefectural election administration commission's announcement that more than 80 percent of signatures in a petition drive to recall Aichi Governor Hidekai Omura were believed to be faked. (Kei Kobayashi)

NAGOYA--Prefectural election authorities said most of the hundreds of thousands of signatures collected in a petition drive to recall Aichi Governor Hidekai Omura will not count because they show similar penmanship.

The Aichi prefectural election administration commission announced on Feb. 1 that it found 83 percent of the 435,000 signatures submitted are invalid because they were written by a limited number of people.

The announcement comes on the heels of growing calls from the public to hold Nagoya Mayor Takashi Kawamura accountable for his aggressive efforts in promoting the signature-collection drive.

Later that day, Omura said he was shocked by the commission’s findings.

“This is a serious situation that shakes the foundations of democracy,” he said. “I am hoping the facts of the case will be revealed by all the people involved.”

The drive to recall Omura was led by Katsuya Takasu, a cosmetic surgeon well known for denying the Holocaust and the Nanking Massacre.

The commission said about 362,000 of the 435,000 signatures collected are suspected to be invalid. About 90 percent are believed to be forgeries made by multiple individuals.

Commission officials said some 48 percent of the signatures were names not listed on the list of eligible voters.

The commission is now weighing whether to file a criminal complaint over the fraud, officials said.

Takasu and other recall proponents began the petition drive in August 2020 as they denounced some of the exhibits at “After ‘Freedom of Expression?’” a section of the Aichi Triennale 2019 arts festival held in Nagoya and elsewhere in the prefecture.

Key pieces of contention included a series of burnt images, including one of Emperor Hirohito (1901-1989), as well as a statue of a girl representing Korean women who were forced to provide sex to wartime Japanese troops.

Omura, chairman of the art festival’s organizing committee, defended the exhibition as freedom of expression. But Kawamura, who also served on the committee, blasted the exhibits as inappropriate for a tax-funded project.

After the launch of the petition drive, Kawamura hit the streets to call for signatures to aid Takasu’s recall effort.

But the number of signatures submitted to municipal election administration commissions fell short of the 860,000 required.

The prefectural election administration commission urged municipal commissions in December to review all the signatures gathered in the face of complaints from voters who said their names were on the petition even though they did not remember signing it.

Shigeki Sugie, a member of the prefectural assembly, was baffled to find his name on a copy of the list of petitioners that he obtained in early December through an information disclosure request.

His name, address and birthdate were all there, even complete with his thumbprint--none of which he remembers ever providing.

“I was both astounded and outraged,” he said of the faked signature.

Sugie also said he examined the section showing when other signatures were added, since it was not redacted in his copy.

"All the dates were the same as his and the handwriting looked similar across numerous entries," he said.

Sugie said his brother-in-law, too, complained about finding his name despite not having signed it.

A representative of a political organization established by Takasu for the signature-collecting campaign said his group will hold a news conference at a later date after reviewing the complaint.