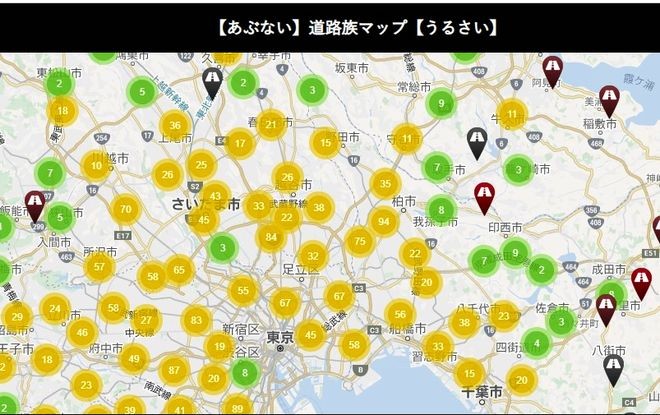 A mapping website that shows areas with noisy children, loud gossipers and other “annoying” people has drawn criticism as promoting intolerance and providing an outlet for disgruntled residents seeking to lash out at their neighbors.

The Dorozoku Map (Road tribe map) site is designed for people who want to live in quiet environments. “Dorozoku” has become an online term that refers to children and adults who are loud in public as well as trespassers.

Opened in 2016, the site as of Feb. 1 featured 5,973 registered spots nationwide where children play on roads. Clicking the icons on the map will show descriptions of the specific areas, such as “children noisily playing with balls” and “their parents engage in back-fence gossip together for hours.”

The word “annoying” features heavily in the featured messages.

One post reports that “children of elementary school age continue playing and romping around irrespective of the trouble caused to residents nearby.” Another says, “My car nearly hit children on many occasions.”

All age groups were targeted by the complainants.

A baby “can be heard crying shortly after 7 in the morning,” a post said. Another person complained that “children of lower kindergarten age are shouting on the street in the evening and on Saturdays and Sundays.”

According to one user of the site, children of preschool to upper elementary school age “run around while screaming although a park is within tens of meters.”

An online system developer in his 40s created and continues to operate the site.

In response to an email inquiry by The Asahi Shimbun, he explained why he opened the site.

“I believe the dorozoku problem is partly harassment by neighbors,” he said. “I want to be of help to eliminating the issue as the times change.”

The site operator said noisy children started appearing on a street in front of his former residence, making it impossible to work at home. He began the service to “provide information so users can choose better places to relocate to.”

Some online users have praised Dorozoku Map for “clearly displaying whether certain areas are tolerant of children’s playful voices and proving helpful for families with children to choose homes to buy.”

But others are upset that their areas have appeared on the map.

A care facility for children stands along a Tokyo street that the site describes as “noisy with kids’ voices.” An insider said the children are taken for strolls and other outdoor activities in the hours mentioned on the site.

“I did not know our establishment is on the site,” said the insider. “It has been open for more than five years and received no complaints so far.”

A woman in her 30s who picked up her child at the facility expressed concern. “The location is shown so I fear users may visit here after checking the map,” she said.

Dorozoku Map accepts sightings through registration forms. The details are screened and released on the site.

The site operator said he removes personal information, slanderous messages and posts that could lead to crimes, such as “girls playing in a pool” and “only girls are there.”

He said such problematic and deleted messages account for around 10 percent of all submissions.

He also said he has received 100 or so requests to delete comments because the issues mentioned have already been settled in the communities.

“I know the map is likely to be considered as one that makes people feel that ‘it is exposing them,’” he said. “But it is also a fact that many people are continuously troubled by noise and other issues.”

Norihisa Hashimoto, a professor emeritus of acoustic environment engineering at the Hachinohe Institute of Technology, noted that judgments on whether neighborhood sounds are “irritating noise” can be determined by the individual’s loneliness, stifling mood and other psychological factors.

How well the person is coping under the novel coronavirus crisis could also affect judgment.

Hashimoto, who heads the General Research Laboratory of Noise Problem, said people who read the posts on the website “may feel their own rage is reasonable, fueling intolerance.”

“Those who post comments should be tolerant and calmly rethink if others’ behavior can really be deemed as a nuisance,” Hashimoto said. “At the same time, guardians of children should be moderate, such as limiting play time.”

(This article was written by Seiko Sadakuni and Yasukazu Akada.)