Could lying face down prevent COVID symptoms from worsening? 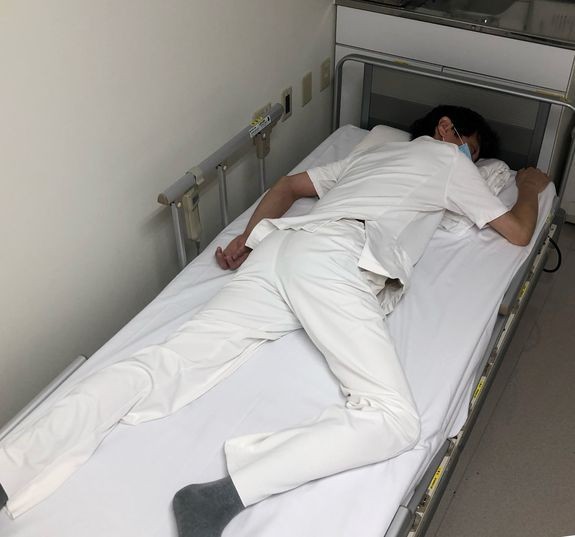 Prone position therapy entails having a patient lie face down as illustrated in this photo. (Provided by Hideaki Dairi)

Nurse Hideaki Dairi had an eye-opening experience during a night shift in April last year that changed how he and other health care workers treat COVID-19 patients with moderate symptoms.

A colleague at the Metropolitan Komagome Hospital in Tokyo’s Bunkyo Ward came rushing up to Dairi, 58, alarmed that a patient’s blood oxygen level was low and nothing was bringing it back up.

The oxygen level refers to the percentage of hemoglobin carrying oxygen in the blood, and it should be close to 100 percent for a healthy individual.

The patient--an elderly woman hospitalized with COVID-19--had oxygen level reading below 90 percent at the time. She was apparently suffering from respiratory failure, and her numbers showed few signs of improvement, even when the concentration of oxygen inhaled reached the maximum.

“Would you try lying face down?” Dairi proposed.

Her oxygen level improved dramatically within about three minutes.

Since that encounter, a group of nurses working at a special coronavirus ward there has taken up the question of whether lying prone could effectively prevent COVID-19 patients with moderate symptoms from developing severe conditions. And it is drawing the attention of medical workers across Japan.

There is still a lot to learn about the potentially promising practice and COVID-19, and there are still practical problems to sort out.

But the simple technique is now being touted as a therapeutic breakthrough that could help lessen the load on hospital beds allocated for severe COVID-19 cases, which are falling into tighter supply as the health crisis worsens.

What is called “prone position therapy” (PPT), or the therapeutical practice of having a patient lie face down, has been endorsed and promoted by the likes of Shigeaki Hinohara (1911-2017), an influential doctor and essayist.

The health ministry’s treatment guidelines for COVID-19 patients note that PPT is effective for cases that involve severe pneumonia. But the potential effectiveness of PPT for moderate COVID-19 cases, which require oxygen administration, if not the use of an artificial respirator, has not been broadly recognized.

Following Dairi’s night-shift discovery, staff at the hospital ward began coordinating PPT on patients with moderate cases under the direction of attending physicians.

Between April and October last year, Dairi and his colleagues in the special COVID-19 ward performed PPT on 23 patients with moderate symptoms for seven hours a day.

As a result, the blood oxygen saturation, an indicator for the level of oxygen intake into the blood, improved in all the cases. Respiratory rates also dropped in 16 of the 18 cases for which records were taken.

Two of the 23 patients managed to avoid being put on an artificial respirator, Dairi said.

He explained that the prone position works so well because it makes the most of the patient’s lung functions.

Dairi presented the PPT findings at the 42nd annual meeting of the Japanese Society of Respiratory Care Medicine in December at a session of non-invited talks on COVID-19.

At the session, he received the best talk prize because, among other things, the practice could prove effective at preventing the onset of severe symptoms.

Cases have surged since the academic talk, but at the same time its effectiveness as a therapy is becoming ever clearer, Dairi said.

Performing PPT on patients with severe symptoms who find it difficult to move their bodies on their own requires the involvement of skilled workers who know how to change their body positions so pressure on their eyes do not cause a loss of eyesight and catheters and other tubes do not slip out.

There are, however, fewer concerns for patients with moderate symptoms who can turn over on their own in bed, Dairi said.

That said, putting the therapy into practice is not without its challenges.

For example, a protracted application of PPT therapy means that patients spend longer hours in bed, which could cause their legs to weaken. It is difficult for obese patients to lie face down. And doctors have yet to establish the optimal length of time to lie prone.

“We will see clues to solving those problems when we have accumulated more knowledge,” Dairi said.

“A more widespread use of PPT for moderate COVID-19 cases could help avert the need for artificial ventilators in some of those cases and thereby lessen the load of hospital beds for severe cases,” Dairi said.

Midori Kawashima, a professor emerita with the Japanese Red Cross College of Nursing, also expressed optimism about a broader use of PPT on COVID-19 patients with moderate symptoms.

“That could serve as a means for preventing a collapse of the public health care system, at a time when people agree on a need to do so but they have no concrete measures in sight for doing so,” Kawashima said.

“I know it is never easy to work on something new when patients are arriving in large numbers, but if patients get better, that will provide a boost to nurses on the front lines who have long been working in distress,” she added. “I hope more hospitals will learn about this new practice.”