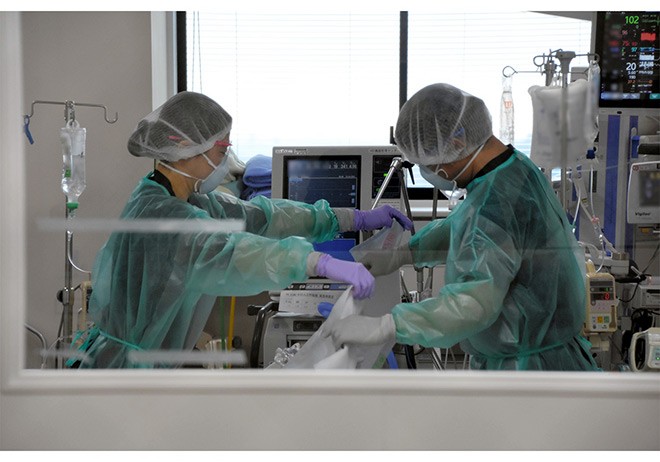 Nurses at a Chiba city hospital treat a COVID-19 patients in a negative-pressure room. (Susumu Imaizumi)

Japanese doctors and nurses fighting the novel coronavirus will not have the time to volunteer to help at the Olympics, a medical association has said, raising another headache for organizers determined to hold the postponed Games.

The director of the Tokyo Medical Association, which represents 20,000 doctors from dozens of smaller medical groups, said doctors and nurses were under too much strain dealing with a third wave of the pandemic to even consider signing up for the Olympics.

“No matter how I look at it, it’s impossible,” said Satoru Arai, whose association was asked by both the Tokyo Olympic Organizing Committee and the Tokyo Metropolitan Government last March to secure more than 3,500 medical staff for the event.

“I’m hearing doctors who initially signed up to volunteer say there’s no way they can take time off to help when their hospitals are completely overwhelmed,” Arai told Reuters this week, adding that he could not bring himself to push for volunteers at such a critical time.

The Games had to be postponed from last July and August as the coronavirus spread around the world and are now scheduled for July 23-Aug. 8.

But persistent clusters of infections in Japan have raised questions about the feasibility of holding the Games this year and eroded support for the extravaganza among a public nervous about athletes and spectators bringing in new cases.

New infections in Japan rose to new highs in early January, triggering a state of emergency in Tokyo and some other areas. The government extended the emergency in most of those places on Tuesday.

Japan has fared better than some other countries in the struggle against the virus. It has had 390,000 cases and 5,794 deaths.

As of last Wednesday, 73 percent of beds available in Tokyo for COVID-19 patients were full, with 2,933 people.

The government is determined to hold the showcase event, partly to herald what it hopes will be the end of the pandemic.

As part of the preparations, Olympic Minister Seiko Hashimoto told parliament last week the government had a plan to secure about 10,000 medical personnel for the Games.

Arai said an Olympics without spectators would relieve most of the burden of providing doctors and his association believed that’s how it should be organized.

While the possibility of a Games devoid of fans has been floated, organizers say they are reluctant to even contemplate that.

The Tokyo Olympics organizing committee did not immediately respond to a Reuters request for comment about medical services.

Organizers have suggested that volunteer doctors could be paid for their work, according to a lawmaker who attended a Tuesday meeting.

That would mark a departure from what has become common practice at recent Olympics, with medical staff coming forward as unpaid volunteers.

But Arai said it was not about the money. His concern is simply that doctors would be overwhelmed with coronavirus patients and vaccinations through the summer.

Tokyo Games organizers and the International Olympic Committee will hold a briefing on COVID-19 measures at 0900 GMT, at which officials are expected to affirm their commitment to holding the Olympics in Tokyo this July.

Arai said his association had not received any details about plans.

“We got worried and reached out to the Olympic organizing committee at the end of last year, asking what the plan was,” he said. “But we still haven’t heard anything.”