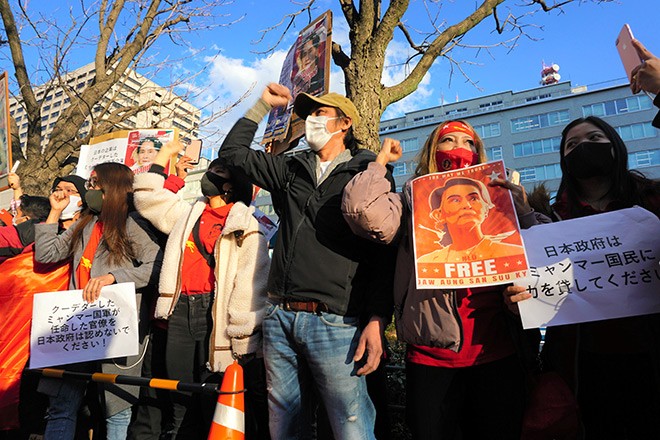 Myanmar nationals living in Japan protest the military coup in their homeland and call for the release of detained leader Aung San Suu Kyi in front of the Foreign Ministry building in Tokyo’s Kasumigaseki district on Feb. 3. (Ari Hirayama)

Thousands of Myanmar citizens living in Japan demanded Myanmar leader Aung San Suu Kyi, detained in the middle of a military coup, be set free at a demonstration in front of the Foreign Ministry building in Tokyo’s Kasumigaseki district on Feb. 3.

About 3,000 protesters took part, according to organizers.

One protester threw a photo of Myanmar's military commander on the ground and stomped on it during the protest organized by the Union of Myanmar Citizens’ Association. The crowd also sang a song often sung by members of Myanmar's pro-democracy movement.

“I was wrong to believe that Myanmar was a democratic country,” said vocational school student Ei Thandar Aung, 25, who took part in the demonstration. “After I heard about the military coup, I was so bitterly disappointed I just cried.”

“I'd like the Japanese government, which supported the democratization in Myanmar, to help us,” said restaurant owner Kyaw Kyaw Soe, 57.

A former technical intern at the protest said he was worried about his relatives in Myanmar after being unable to contact them by phone or online.

The man, 32, is the youngest among three siblings and came to Japan four years ago to help his family who run a variety shop in Myanmar.

He last spoke with family members in Myanmar on Jan. 26, he said.

But he said he was most worried about the fate of Suu Kyi.

“I'm worried about my family, of course, but my greatest concern is for Suu Kyi who fights hard for our nation,” he said. “I hope that the Japanese government will put more pressure (on the military government).”

(This article was written by Tatsuya Sato and Ari Hirayama.)