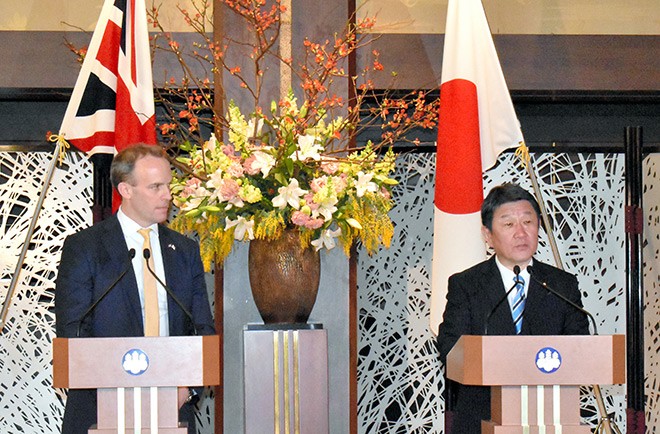 Japan and Britain agreed to strengthen cooperation to bring about a free and open Indo-Pacific (FOIP) region in a video conference between their respective foreign and defense ministers on Feb. 3.

China’s recently enacted coast guard law that allows it to use weapons against foreign vessels was the first issue Japan raised at the rescheduled "two plus two" meeting.

The Japanese ministers insisted that the new provisions must not be applied in a manner that violates international law.

They also welcomed Britain's planned dispatch of the Queen Elizabeth aircraft carrier strike group to East Asia this year as the two sides reconfirmed that “cooperation in maritime security will continue to be a priority” for the two nations.

Government officials also have a plan to use plants in Japan to repair British naval aircraft attached to carriers.

Tokyo wants to utilize Britain’s naval power to offset the maritime advances being made by China, while London is seeking new avenues of regional cooperation in the wake of its departure in 2020 from the European Union.

Japan and Britain, in a joint statement issued after the meeting, said the nations are “global strategic partners who share a fundamental commitment to core values of freedom, democracy, human rights and the rule of law” and that they “renewed their commitment to further strengthening cooperation towards a free and open Indo-Pacific.”

The two sides also confirmed their commitment to strengthening cooperation in such areas as cyberspace, economic national security, efforts to deal with the novel coronavirus pandemic being emphasized by the administration of U.S. President Joe Biden and climate change.

Government officials have placed greater expectations on Britain's engagement in the Indo-Pacific region.

Defense cooperation with Britain intensified with the start of Shinzo Abe’s second stint as prime minister in late 2012. The trend gained momentum with the British national referendum on Brexit.

The two-plus-two meeting on Feb. 3 was Japan's fourth with Britain but the first in three years, which had been postponed mainly due to the COVID-19 pandemic.

With the world’s growth center shifting to the Indo-Pacific region, government officials believe now is the perfect opportunity to strengthen ties with Britain.

“Britain also wants to become involved in the economic growth in this region.” a government source said.

(This article was written by Tatsuya Sato and Daizo Teramoto.)