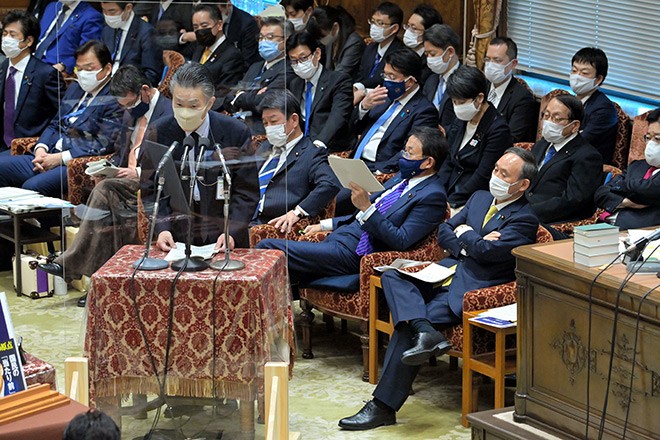 Yoshinori Akimoto, director-general of the information and communications bureau of the Ministry of Internal Affairs and Communications, speaks at a Lower House Budget Committee session on Feb. 4. Prime Minister Yoshihide Suga is seated at front right. (The Asahi Shimbun)

After Bunshun Online broke the scandal on Feb. 3, Suga told reporters, “I am not aware of the matter at all.”

“I think the ministry will properly handle the case,” Suga said, adding that he has “no intention” of asking his son about it.

But Suga's aloof approach quickly changed at a Lower House Budget Committee meeting on Feb. 4, where opposition lawmakers grilled the prime minister about the scandal.

Suga said he has talked with his son over the phone about the Bunshun report.

"I told him to cooperate with the fact-finding investigation," Suga said.

But he also expressed resistance, saying, "In principle, I should not respond to such questions here" because his son "does not hold a public position" and the matter "involves his and his family's reputation and privacy."

According to the report, Yasuhiko Taniwaki, the vice minister for policy coordination at the Ministry of Internal Affairs and Communications, and three other top ministry officials dined with top executives of Tohokushinsha Film Corp., a Tokyo-based company that produces TV programs and satellite-based broadcasting.

The dinners took place on separate occasions from October to December in 2020.

They did not pay for their meals, nor did they report the dinner to the ministry, according to the report. They accepted gifts and taxi tickets from the company officials.

National government personnel are required to inform the ministries and agencies they work ahead of time about wining and dining with stakeholders if it costs more than 10,000 yen ($95). They are prohibited from being treated by stakeholders, such as having a free meal.

According to the report, Suga’s oldest son, who works at the company, attended the dinners.

The four bureaucrats oversee policies related to broadcasting and telecommunications.

Tohokushinsha is involved in satellite broadcasting, which requires ministry approvals and licenses.

The ministry said the four did not notify the ministry in advance about the dinners and three of them, except Yumoto, had dinners that cost more than 10,000 yen.

The ministry made the bureaucrats submit a report on Feb. 2. The ministry said it has reported the matter to the National Public Service Ethics Board and it will investigate.

The ministry has also instructed the four to pay the company what they were supposed to cover and return money for the gifts and taxi rides.

Taniwaki admitted that he dined with the Tohokushinsha officials but said he could not recall who picked up the tab.

“I don’t remember if I paid for the dinner at the time,” he said.

He said he calculated the amount he owed by dividing the total sum by the number of dinner attendees and paid that amount back to the company.

Yoshida said, “The fact that this has been talked about in the media may bring a sense of distrust of public administration.”

He added, “I am sorry, and I want to regret what I should regret.”