Yoshiro Mori, president of the Tokyo Organizing Committee of the Olympic and Paralympic Games, apologizes at a Feb. 4 news conference for a sexist comment he made the previous day. (Video footage by The Asahi Shimbun) 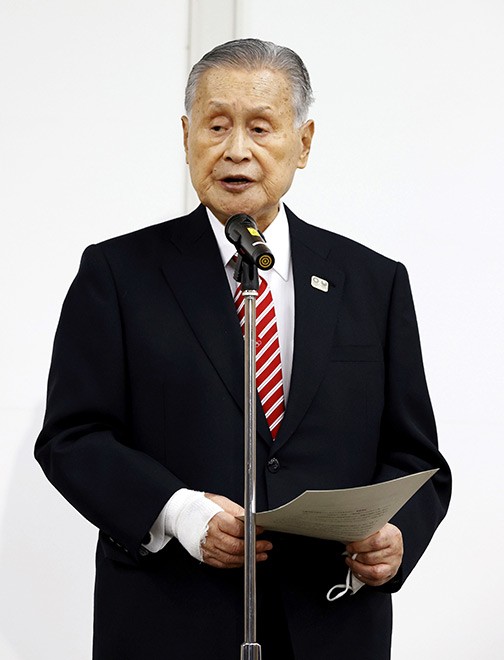 Yoshiro Mori, president of the Tokyo Organizing Committee of the Olympic and Paralympic Games, apologizes at a Feb. 4 news conference for a sexist comment made the previous day. (Pool)

Yoshiro Mori on Feb. 4 retracted his sexist remark, refused to resign as president of the Tokyo Olympic organizing committee, and became increasingly irritated at reporters during a news conference held for his apology.

“It was an inappropriate remark that went against the spirit of the Olympic and Paralympic movement,” Mori, 81, said at the news conference. “I deeply apologize for it.”

The former prime minister said at a Japan Olympic Committee Council meeting on Feb. 3 that having a large number of female committee members leads to prolonged meetings because they talk so much.

His comment triggered a backlash on the internet and was widely reported in foreign media.

Organizing committee sources said Mori contacted the committee and said he wanted to apologize at a news conference.

At the JOC Council meeting, Mori prefaced his comment as a “private opinion” and said: “A meeting of an executive board that includes many women would take time. Women are competitive. When someone raises his or her hand and speaks, they probably think they should speak, too. That is why they all end up making comments.”

He added, “I was told that if the JOC plans to increase female members of the executive boards (of sports organizations), meetings will be drawn out unless the time allotted for each speaker is limited to some extent. I will not say who said so.”

While Mori was initially apologetic at the Feb. 4 news conference, he lost his patience as about 40 reporters peppered him with questions about what he really meant by his previous day’s comments and whether he was fit to remain the Olympic organizing committee president.

“If all of you say I am getting in the way, then perhaps it may be true that this ‘problem elder’ has become like a large piece of garbage,” Mori said at one point. “If that is the case, by all means just sweep me away.”

When one reporter asked Mori if he thought he should continue as committee president, Mori shot back, “What do you think?”

When the reporter said Mori should resign, the former prime minister muttered, “All right, I will take your view into consideration.”

At a Lower House Budget Committee session on Feb. 4, Prime Minister Yoshihide Suga was asked for his views on Mori’s “time-consuming” comment.

“It is a remark that should not have been made,” Suga said.

When he was asked earlier by a different opposition lawmaker, Suga only said he was not aware of the details of Mori’s comment.

Kyoko Raita, a professor at Chukyo University’s School of Health and Sport Science who specializes in Olympic history and also heads the Japan Society for Sport and Gender Studies, said Mori’s remarks underscored his low level of sensitivity to social change and public nature.

She added that the other members of the JOC Council were unfit to serve as promoters of the Olympic movement because they just sat there and said nothing while Mori continued with his offensive comments.