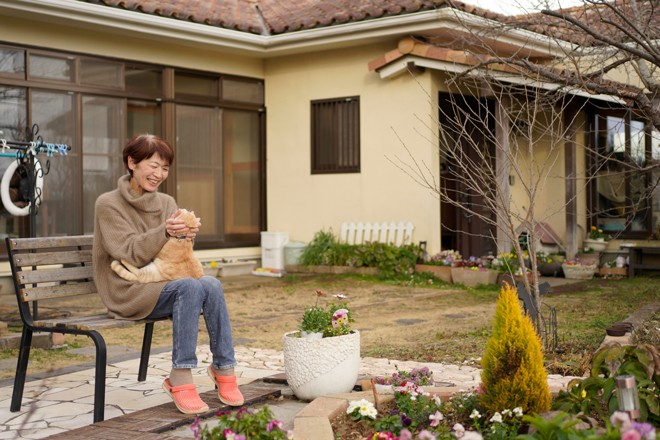 Michiko Watanabe, who is fighting colon cancer, at her home in Shirako, Chiba Prefecture, in January (Ryo Ikeda)

Michiko Watanabe feared her cancer had returned after a sudden weight loss in spring last year, and an X-ray revealed a shadow measuring 1.5 centimeters on her colon.

However, after several hospital visits, Watanabe, a 59-year-old resident of Shirako, Chiba Prefecture, grew reluctant to venture outdoors for the additional tests to confirm her condition.

“I would have gone to other hospitals a lot earlier for re-examination if there was no risk of contracting the novel coronavirus,” she said. “Cancer does not take into account my circumstances.”

Although health care experts underline the importance of regular checkups for the early detection of cancer, large numbers of people, such as Watanabe, have shied away from medical tests out of fears of becoming infected during the COVID-19 health crisis.

A study by the Japan Cancer Society, a public interest incorporated foundation, found that the number of people who were screened for stomach, lung, breast, colon and uterus cancers plunged by 63 percent between April and July last year, when the virus was spreading, compared with the same period in 2019.

The government recommends routine examinations for these five types of cancers.

About 1 million people are diagnosed with cancer in Japan every year.

Watanabe’s cancer was first detected four years ago. She underwent surgery to remove the tumor, followed by another operation after the cancer recurred.

Following the weight loss last spring, she made an appointment for a CT scan using contrast dye at a Tokyo hospital for detailed examination. But it was canceled after she developed hives. Other tests she had at the hospital detected no cancer.

She then decided to avoid hospitals and the risk of COVID-19.

By mid-July, she had developed a fever and abdominal pain. A local hospital test found the shadow on her colon had grown to 5 cm long.

Additional examinations showed that her tumor had spread to an artery in her left hip joint, indicating that her colon cancer was at the most serious Stage 4.

Yuichiro Doki, chairman of the Japan Society of Clinical Oncology and head of Osaka University Hospital, warned that cancer diagnoses might come too late for certain patients who skip examinations.

“The size of a tumor doubles in two to three months for patients in advanced stages of stomach, colon or esophagus cancer,” he said. “You should not avoid a checkup.”

Mayo Yamamoto, a 39-year-old mother of 4-year-old twins in Hyogo Prefecture, regrets that she opted out of a checkup for cervical cancer in May.

She had made it a point to undergo the checkup every other year. But she decided to take extra precautions against the virus while working as an accountant and raising her daughters.

“I thought I would be OK because I have not had any problems” indicating cancer, she said.

But in mid-August, she had abnormal vaginal bleeding and abdominal pain. After repeated tests and a thorough examination in early October, it was confirmed that she had cervical cancer.

On her doctors’ recommendation, her uterus was removed because the cancer was likely to become metastatic.

Yamamoto said she has been tormented by the idea that she might have avoided the hysterectomy had she undergone the check in May.

According to the Japan Cancer Society, more than half of its regional branches have projected year-on-year declines of more than 30 percent in the number of people undergoing routine checkups during the current fiscal year, which ends in March.

The drop could have serious consequences.

About 580,000 people a year are diagnosed with the five types of cancer.

The diseases in around 120,000, or 20 percent, of the total are discovered during routine physical or comprehensive medical examinations.

A decline of 10 to 30 percent in the number of examinees would mean that 10,000 to 30,000 people could miss a chance to detect their cancers early.

In addition, fewer cancer surgeries were performed last year, according to a study of stomach and colon cancer operations conducted at 42 hospitals in Osaka and Hyogo prefectures.

The study by Osaka University Hospital found that the number of stomach cancer surgeries dropped by 19 percent between April and November 2020 from the same period the previous year.

The decline was 11 percent for colon cancer operations.

Takahisa Matsuda, chief of the Cancer Screening Center at the National Cancer Center Hospital in Tokyo, stressed the benefits of having regular cancer checks and additional examinations when recommended.

“If your cancer is detected early, the physical and economic burden would be smaller,” he said. “You should not miss an opportunity to undergo cancer screening provided by a local government and make sure to have a more detailed examination if a positive test result turns up.”

Navigating through the pandemic is adding to the burden of many patients who are battling cancer with weakened immune systems.

A 41-year-old man in Tokyo with lymphatic malignancy, a type of blood cancer, said he has continued with his weekly hospital visits since last March but first must overcome his fear of being infected with the novel coronavirus.

He has not recovered from lung inflammation he suffered after receiving a bone-marrow transplant.

The 90-minute trips to the hospital have been a great ordeal for him, particularly when his breathing is unsteady and his heart rate increases.

He often has to stop walking due to exhaustion, and he chooses train cars that are not crowded. There were times when he could not move for hours because of his rapid heartbeat.

He also fears the coronavirus vaccine may not work for him because he takes steroids and medicine for his immune system.

But he tries to see a positive side.

“It is difficult, but I am still alive,” the man said. “I know there are many people who are worse off.”

(This article was written by Sokichi Kuroda and Tokiko Tsuji, senior staff writer.)