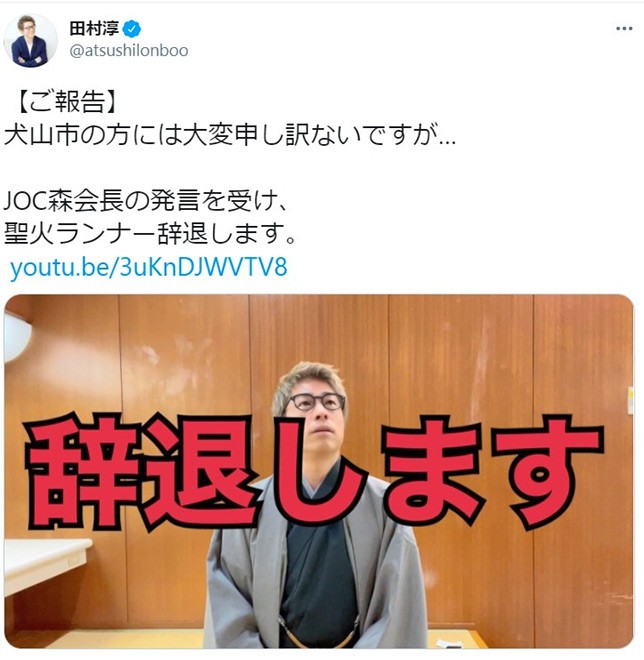 Atsushi Tamura, a popular comedian, announces his decision not to run in the Olympic torch relay on Twitter on Feb. 3. (Yuko Kawasaki)

A popular comedian who is a prospective Olympic torch relay runner backed out of the event, citing his disgust at remarks made by the head of the Games’ organizing committee, Yoshiro Mori.

Atsushi Tamura, a member of comedic duo London Boots, who is a regular on many TV and radio programs, on Feb. 3 announced that he will quit his role as an Olympic torch bearer on his social media accounts.

Tamura, 47, in a video posted on his YouTube channel, cited several remarks made recently by Mori, president of the Tokyo Organizing Committee of the Olympic and Paralympic Games.

One was Mori’s comment at a Feb. 2 meeting with lawmakers of the ruling Liberal Democratic Party, during which he said, “We will hold the Olympics, regardless of how the coronavirus (situation) looks.”

Tamura said he felt what Mori said was "incomprehensible" and ignored public sentiment.

Mori also mentioned the Olympic torch relay, scheduled to start from Fukushima Prefecture on March 25 and continue throughout the nation until the Games' opening ceremony in July.

To prevent crowds from gathering along the relay routes in order to lower the risk of novel coronavirus infections, Mori said: “Popular celebrities should run where not many people will gather. Somebody said, 'How about running the routes in the middle of rice fields?' But others said it would attract more people because rice paddies are spacious.”

"I'm not sure if it was a joke" Tamura said in the video. "But making remarks like this so casually is such a turnoff.”

“I just can’t go along with (what Mori said). And it's an insult to farmers as well,” he added.

Tamura said talents perform a task with an awareness of their power to influence people.

“If there's no need to bring people out to the torch relay routes, I think celebrities shouldn't be a part of it,” Tamura said.

Tamura stressed he is not opposed to staging the Olympics, but favors delaying it due to the COVID-19 pandemic.

“I hope the Games will be held, but I’m one of those who think it should be postponed (again),” he said. “Containing the coronavirus pandemic and setting things straight is the most urgent thing right now, more than anything else.”

Tamura was scheduled to run the torch relay’s portion in Inuyama, Aichi Prefecture.

Tamura has been known for his love of castles and serves as a special tourism ambassador of the city, which has Inuyama Castle, a national treasure originally built in 1537.

The portion of the torch relay that runs through Inuyama is expected to finish at the castle, and Tamura was supposed to be the final runner.

Tamura said on the website of the prefectural torch relay organizing committee that the castle “is not big but radiates an aura,” and he hopes to “help convey the appeal of the castle to people in Japan and abroad.”

“I was looking forward to (seeing him in the relay), but I respect his feelings and decision,” said Inuyama Mayor Takuro Yamada, who recommended Tamura to be a torch bearer, after Tamura notified the city of his withdrawal.

Mori, 83, in the meantime, has been busy spatting over the misogynistic remarks he made on Feb. 3, when at a Japan Olympic Committee Council meeting he ridiculed female board members and said they were "annoying" as they tended to talk too long in meetings.

At a news conference where he halfheartedly apologized for the comments, Mori was asked about Tamura’s decision.

The former prime minister said he told the lawmakers that, "It is a good thing if popular celebrities decline to run where people gather."

Asked if he wants other torch bearers to still participate in the relay, Mori said, “I’m not in the position to say, 'I want you to run,' or, 'I don’t want you to run.'”

Rather, he said, that decision will be left up to local organizers to make.

“I have no idea at all who's running in the relay,” the Olympic chief said.