VOX POPULI: Just like in 1862, popular wisdom wins over phony cures for virus 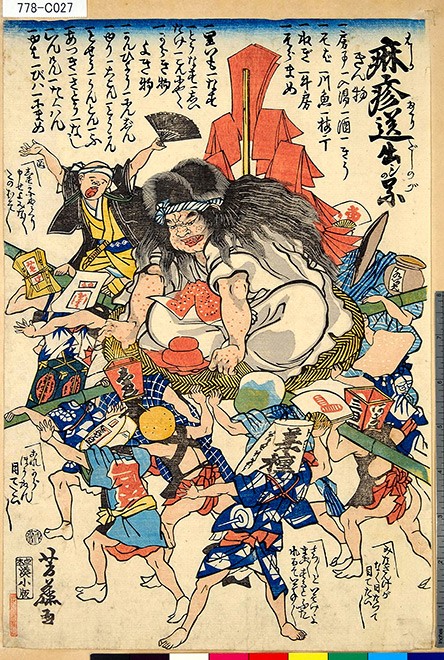 A “hashika-e” from 1862 depicts the god of measles being carried off on bamboo poles. (Provided by the Tokyo Metropolitan Library)

At the height of a measles pandemic in 1862, a genre of ukiyo-e woodblock prints known as “hashika-e” (literally, measles pictures) disseminated a mountain of gossip and hearsay.

One bit of dubious information they circulated went to the effect that people could safely eat dried daikon radish, edible lily tuber and abalone, but they could get sick from salad tossed in rice vinegar, fava beans and burdock root.

“Today, ukiyo-e are considered valuable works of art,” noted Mitsuo Kato, 59, a curator at the Saitama Prefectural Ranzan Historical Museum. “But for the common folk of Edo (present-day Tokyo), ukiyo-e was a cheap source of information.”

Unlike “kawaraban” prints published in text only, hashika-e reported “news” in pictures as well, which apparently appealed to the masses.

It revealed the types of businesses that went south because of a warning against drinking during the pandemic.

A portrait of an “oiran” (high-class courtesan) in convalescence urged people to refrain from bathing and drinking for 75 days.

According to Kato, unverifiable information was quickly discredited between the pandemic’s first wave in spring and second in summer.

The type of hashika-e that survived the test of time portrayed a man arranging flowers and a woman reading at home to avoid catching the disease.

I am reminded of some bizarre anti-coronavirus tips that went viral on social media last spring.

“Carry a fragment of granite on your person,” went one. Another recommended drinking “water heated to 27 degrees.”

I never came across anyone who took these suggestions seriously, but I did see what it meant for society to become restless.

We, too, have learned many things each day while going through the pandemic’s second and third waves.

No one is hoarding supplies anymore and “coronavirus vigilantes” have gone away.

I want to thank my contemporaries for their good sense.