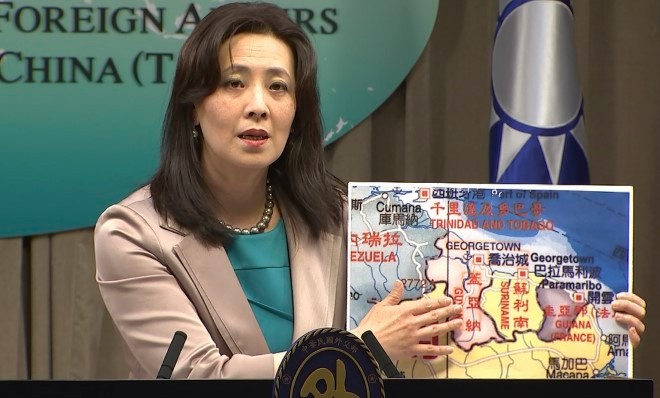 In this image made from video, Taiwan’s Ministry of Foreign Affairs spokesperson Joanne Ou points at a map of Guyana at a weekly press conference on Feb. 4. (AP Photo)

TAIPEI--Taiwan on Friday blamed Chinese interference for preventing the establishment of a trade office with Guyana in what had been seen as a diplomatic victory just 24 hours earlier.

The Foreign Ministry said China had exerted pressure on the South American country’s government and the agreement could not be salvaged despite considerable efforts.

“Our government expresses deep regret toward this,” the ministry statement said. “China’s bullying and efforts to isolate Taiwan and shrink its international space... only emphasize more clearly its evil nature and drive the people of the two sides further apart.”

China’s Foreign Ministry had responded swiftly to Thursday’s announcement, demanding those concerned avoid setting up any official institutions with each other and to correct mistakes.

China claims the island is its territory and exerts significant diplomatic pressure worldwide to pressure Taiwan, contending it has no right to official exchanges with any foreign governments or multinational organizations such as the United Nations.

The Guyana facility was intended to focus on cooperation in areas like agriculture, education and trade.

Guyana said on Thursday that the facility would not lead to full diplomatic relations with Taiwan.

“We very highly value our relations with China and will maintain that policy 100 percent,” President Irfaan Ali said.

Taiwan has just 15 formal diplomatic allies as well as a network of trade offices around the world that act as de facto embassies, including in the United States, Japan and most other major nations.

China has frequently sought to scupper such arrangements through threatening to withdraw its own diplomatic presence and economic support.

Beijing has refused all direct contacts with Taiwan’s government since the election of independence-leaning President Tsai Ing-wen in 2016. Tsai was reelected last year to a second four-year term.

Taiwan still has strong U.S. support, however. The democratically governed island has had support under administrations of both U.S. political parties, and the Trump administration last year sent the highest-level U.S. government delegation since the U.S. switched relations from Taipei to Beijing in 1979.