Apology does little to quell fury over Mori’s sexist remarks 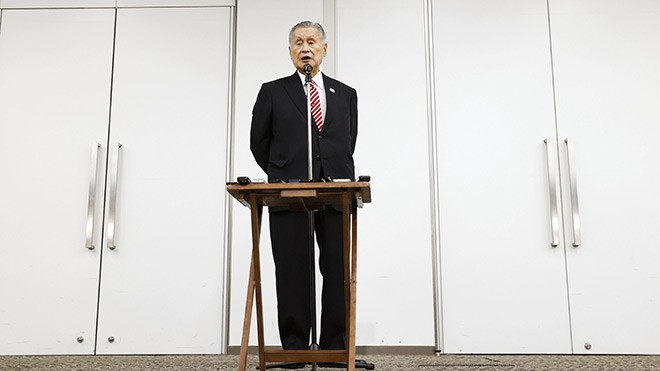 Yoshiro Mori, head of the Tokyo Olympic organizing committee, offers an apology about his sexist remarks at a Feb. 4 news conference. (Pool)

Criticism over the sexist remarks uttered by Tokyo Olympic organizing committee chief Yoshiro Mori spread in the Cabinet and overseas after his apology fell flat and he rejected calls to resign.

Cabinet ministers were in unison on Feb. 5 in blasting Mori’s contention that having a large number of women on sports associations’ committees would lead to prolonged meetings because they tend to talk too much.

He added that while Mori may have apologized and retracted the comments, the continuing international anger directed at the former prime minister underscores the severity of the issue.

Justice Minister Yoko Kamikawa, one of two women in Prime Minister Yoshihide Suga’s Cabinet, expressed concern that Mori’s remarks would set back the government’s plans to have women take up 30 percent of leadership positions in Japan.

She said such efforts would now have to “overcome the harsh criticism that has arisen in Japan and abroad” over Mori’s comments about women.

Seiko Hashimoto, the state minister in charge of the Tokyo Olympic and Paralympic Games, explained at her news conference on Feb. 5 that she received a phone call from Thomas Bach, the president of the International Olympic Committee, late on Feb. 4.

She said she explained to Bach that Mori had apologized and retracted his comments made on Feb. 3.

Hashimoto said Bach told her he understood and asked for the continued cooperation of the government to bring off a successful Tokyo Olympics.

However, at least one IOC member, Canadian Hayley Wickenheiser, a multiple Olympic gold medalist in women’s ice hockey, was not so forgiving.

In a tweet referring to Mori’s comments, she wrote: “Definitely going to corner this guy at the breakfast buffet. See ya in Tokyo!! #oldboysclub.”

Hashimoto also said she called Mori, 83, on Feb. 4 and stressed how important it was to send a strong message to the world at the Tokyo Olympics while taking in the perspective of women. Hashimoto said Mori apologized to her and said he would do everything to make the Tokyo Games a success.

Mori made the offensive comments at a meeting of the Japan Olympic Committee Council concerning a proposal to increase the number of women on sports associations’ boards, including the JOC’s.

“A meeting of an executive board that includes many women would take time,” Mori said. “Women are competitive. When someone raises his or her hand and speaks, they probably think they should speak, too. That is why they all end up making comments.”

He apologized the following day, but signs of contrition disintegrated when he started bickering with reporters at the news conference.

Yuko Inazawa, 62, a specially appointed professor at Showa Women’s University, said Feb. 4 that she felt that Mori was talking about her when he said that meetings doubled in length.

Inazawa became the first female board director at the Japan Rugby Football Union (JRFU) when Mori was president of the association.

“The meetings may have become longer soon after I joined,” Inazawa said. “But I became a director in order to express my views and raise questions as someone who knew nothing about the sport.”

She also said she raised her voice at the board meetings because she had something to say.

“I believe this has become the perfect opportunity for everyone to think about how important it is to resolve the gender gap,” Inazawa said.

One current JOC executive board member, Kaori Yamaguchi, 56, said: “I am very surprised. I had thought that the Tokyo Olympics and the overall Japanese sports world were moving to respect diversity, but his comments totally rejected all such moves.”

Yamaguchi also chairs the Women and Sports Commission within the JOC. Referring to the fact that Mori made his comments during a JOC Council meeting, Yamaguchi said, “Unless the JOC comes out with a clear expression of its position on this issue, it will be considered to have accepted” what Mori said.

Columnist Takashi Odajima said Mori’s comments reflect a general feeling that persists within Japanese society that “trouble will arise if women are involved.”

He added that those who have allowed Mori to remain in his position are also responsible for his remarks.

“Unless there is a change in the general atmosphere about disliking women who express their views or raise counterarguments, comments like his will continue to be allowed in the future,” Odajima said.

JOC President Yasuhiro Yamashita, who attended the JOC Council meeting where Mori made the comments, met with reporters on Feb. 5 for the first time since the outrage began.

“It was an inappropriate comment that went against the spirit of the Olympic and Paralympic movement,” Yamashita said.

He said he initially thought something was wrong about what Mori said, but he never spoke up because the talk then went off in various directions.

Asked if he thought Mori should resign as president of the Tokyo Olympic organizing committee, Yamashita noted that Mori had apologized and retracted his comments.

“I hope he remains to carry out his duties,” Yamashita said.