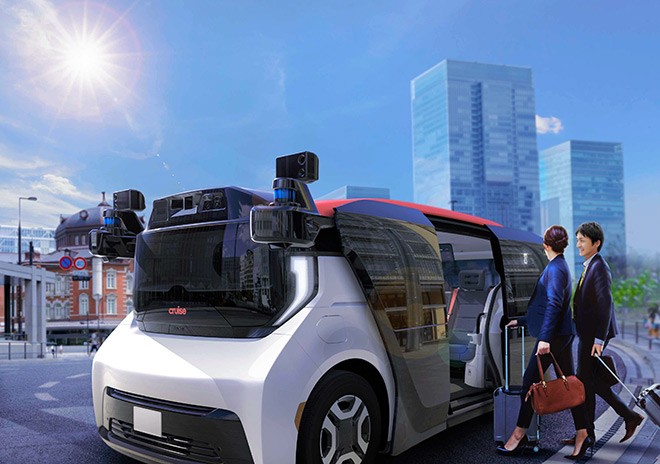 An image of a self-driving vehicle that Honda Motor Co. is developing in partnership with General Motors and GM Cruise Holdings (Provided by Honda Motor Co.)

By the 2030s, the president of Honda Mobility Solutions envisions his company offering a self-driving rideshare service connecting major train stations and destinations.

The service, utilizing an autonomous electric vehicle being developed called the Cruise Origin, will be something “between a bus and a taxi,” said Satoshi Takami.

“We hope to secure the prospect of actually using it around the mid-2020s and turn it into a business in the 2030s,” he said.

Takami said the automaker will roll out an experiment of the vehicle in Japan by the end of the year.

In the trial, the company will operate a self-driving vehicle for experimental use in designated areas. The vehicle’s autonomous ability falls under a level 4 of a five-level scale for driving technology.

The vehicle has already been tested on public roads in California. Takami said Honda will determine if the vehicle can adapt to the road environment in Japan.

Toyota Motor Corp. has developed an autonomous vehicle called the e-Palette and plans to use it at the Olympic Village during the 2020 Tokyo Games.

Toyota hopes to make the electric vehicle available for sale to the public in the early 2020s.

Some information technology companies have joined the competition to develop a self-driving rideshare service system.

Honda is trying to play catch up.