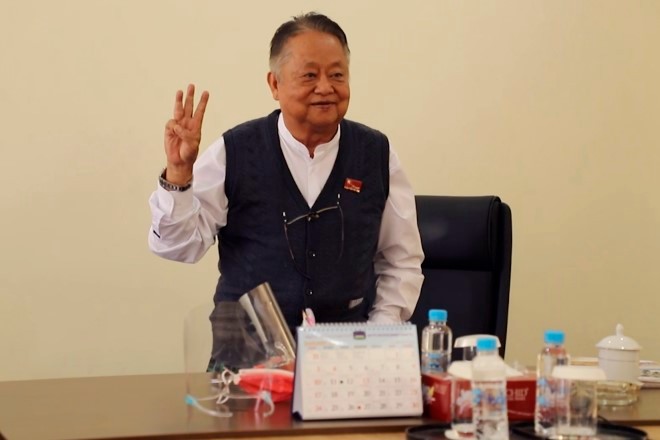 In this image from a video taken on Feb. 2, Win Htein flashes the three fingers protest gesture as a symbol of defiance in Naypyitaw, Myanmar. (AP Photo)

Win Htein, 79, is a longtime confidante of the ousted leader Aung San Suu Kyi and had publicly called for civil disobedience in opposition to Monday’s coup.

He was arrested at his home in Yangon and taken to the capital Naypyitaw, Kyi Toe, a spokesman for Suu Kyi’s National League for Democracy party, said Friday on his Facebook page.

According to the Assistance Association for Political Prisoners, at least 133 officials or lawmakers and 14 civil society activists had been detained by the military in connection with its takeover. The NLD has said Suu Kyi and ousted President Win Myint are being held under charges that allow for their detention until mid-February.

Win Htein told the Myanmar-language service of Britain’s BBC radio in a call early Friday that he was being detained for sedition, which carries a maximum penalty of life imprisonment.

“They don’t like what I’ve been talking about. They are afraid of what I’m saying,” he told the BBC.

The military government on Thursday morning had blocked access to Facebook in an evident effort to thwart protest organizing. Facebook is the primary tool used to access the internet and share information in Myanmar, where traditional media is state-controlled or repressed and independent journalists historically have been detained for reporting that challenged public officials.

Still, signs of resistance were evident. Medical personnel have declared they won’t work for the military government. Anti-coup graffiti appeared in Yangon as well as flash protests on the streets, and a spirited protest by about 20 people occurred outside a medical school in Mandalay. Three people were arrested there, and Twitter posts that could not be verified said people were detained over the Yangon protests as well.

Thousands of people in the capital Naypyitaw joined a rally in support of the military coup on Thursday, the latest of a number of events that aim to project an image of popular acceptance of the power grab.

The takeover has been criticized by President Joe Biden and others internationally who pushed for the elected government to be restored.

“The Burmese military should relinquish power they have seized, release the advocates and activists and officials they have detained, lift the restrictions on telecommunications, and refrain from violence,” Biden said Thursday at the U.S. State Department in Washington, using Myanmar’s former name.

The U.N. Security Council, in its first statement on the matter, “stressed the need to uphold democratic institutions and processes, refrain from violence, and fully respect human rights, fundamental freedoms and the rule of law.” While the U.S. and others have described the military’s actions as a coup, the Security Council’s unanimous statement did not.

The military seized power shortly before a new session of Parliament was to convene on Monday, declaring its actions were legal and constitutional because Suu Kyi’s government had refused to address voting irregularities. The state election commission had refuted the allegations of irregularities and confirmed Suu Kyi’s party won a landslide victory.

The military put all state powers into the hands of the junta, including legislative functions, during a one-year emergency. It also has formed a new election commission to investigate its allegations of voting irregularities, to hold a new election at the end of the state of emergency and to turn over power to the winner.

Myanmar was under military rule for five decades after a 1962 coup, and Suu Kyi’s five years as leader have been its most democratic period since then, despite continued use of repressive colonial-era laws.