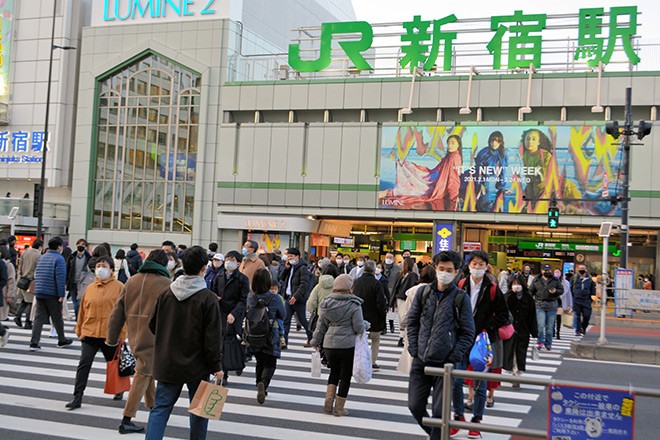 JR Shinjuku Station in Tokyo on Feb. 3, the day after the decision to extend the state of emergency (Yusuke Nagano)

The Tokyo metropolitan government aims to cut the daily average number of new COVID-19 cases by 30 percent or more every week until early March.

The new goal of suppressing the average number of new daily cases to either at or below 70 percent of the previous week’s daily average lands as the number of virus-related deaths reported in the capital rises at a rapid clip. And it comes on the heels of the central government extending the state of emergency until early March.

“We will double-down on our anti-coronavirus measures, which should lead to lifting the state of emergency sooner,” Tokyo Governor Yuriko Koike told reporters on Feb. 3, the day after the extension was announced. “We would like to welcome a nice spring with you all."

At an emergency news conference on Feb. 2, she said Tokyo will focus on two main pillars to get there: maintaining the shortened business hours for restaurants and bars, and expanding the number of people teleworking.

MOST COMPLYING WITH EARLY CLOSURE REQUEST

The metropolitan government started spot-checks of restaurants and bars in 13 bustling areas across Tokyo, including Shinjuku, Shibuya, Ikebukuro and Shinbashi, some of its busiest entertainment areas, on Jan. 18.

Twenty Tokyo officials split into 10 groups are fanning out across the capital for visual checks of whether those eating and drinking establishments are, in fact, closed by the requested time on each weekday.

Officials had checked 13,776 restaurants, bars and others by Feb. 1 and found that 96 percent, or 13,201, complied with the request to close their doors early.

They plan to further expand the survey areas. That said, the total number of businesses to inspect is daunting. Tokyo has some 87,000 eating and drinking establishments eligible for government cash handouts for abiding by the early closure request, and sources said it is extremely difficult for them to check on all of them.

“In my opinion, there is a trend that many business operators are cooperating with the requests of the shortened business hours,” one senior Tokyo official said. “We would like to keep this trend.”

On the other front, Tokyo faces a huge challenge getting more firms to adopt teleworking.

After the second state of emergency was declared, Tokyo called on businesses to redouble their efforts to have their staff switch to remote work.

Tokyo did a phone survey of companies in the capital with 30 employees or more, and about 400 responded.

In January, 57 percent of respondents said that they had staff telecommuting, up six points from the previous month’s 51 percent.

But last April, during the first state of emergency, 63 percent said they were adopting remote work.

“We saw effective results at a certain level, but we would like to achieve a 70 percent reduction in the number of people coming to offices. We want to see a higher percentage in February than that of last April,” a Tokyo official said.

But among companies that have 99 employees or fewer, only 47 percent said they have allowed their employees to work from home.

Tokyo is asking companies that are finding it difficult to switch to teleworking for the full workday to adopt teleworking for just half the day, or on an hourly basis, and rotate the shifts.

DEATHS SPIKING IN TOKYO DUE TO COVID-19

Despite Tokyo’s efforts to improve the infection situation through a variety of virus countermeasures, the number of the deaths of COVID-19 patients in the capital is soaring.

Tokyo’s number of COVID-related deaths reached 259 for the month of January--almost double the previous month. Of that figure, 121 deaths resulted from infections that had spread within facilities, such as hospitals and nursing homes for the elderly.

Many of these are elderly people in their 70s or older, who are at a higher risk of developing serious conditions because of their age.

Their demographic is accounting for more and more of the total number of new infections, a concerning development that has put Tokyo on high alert.

The Tokyo metropolitan government held steady at the highest alert level on the four-scale warning system for its infection situation and medical supply capacity at the Feb. 4 monitoring meeting.

The number of deaths in the capital reached 98 for the week ending Feb. 1. Officials said at the meeting that the number had increased sharply from the previous week, when 68 people died, which was also up from the 39 deaths the week before that.

The metropolitan government said it has officially confirmed a total of 974 deaths between Feb. 26 last year, when the first death was recorded in the capital, and Feb. 4.

Tokyo added 34 deaths in November, when the third wave is believed to have started, but in December the number of deaths was pushed even higher, reaching 138. January saw 259 deaths.

The Asahi Shimbun analyzed the 259 deaths that happened in January.

Of these, 86 percent, or 224 people, were 70 or older. Broken down by the route of infection, 121 people, half the total, became infected in facilities. Of those people, 76 patients became infected at hospitals, while 45 patients picked up the virus in nursing homes for the elderly.

The data shows that the number of elderly patients developing serious conditions is increasing.

(This article was written by Yusuke Nagano and Chiaki Ogihara.)