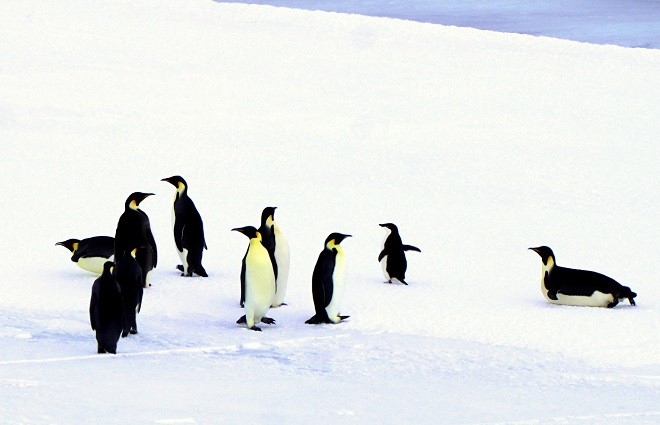 Emperor penguins relax on the sea ice as the Shirase moves forward in the Antarctic Ocean on Jan. 22. An Adelie penguin, second from right, has slipped into the group. (Yumi Nakayama)

Its departure was about one month earlier than usual because its summer schedule was cut short.

The vessel, which will not be resupplied, is expected to reach its homeport in Yokosuka, Kanagawa Prefecture, on Feb. 22.

But first, the crew must carefully monitor the sea ice, the ship’s route and weather conditions while accurately calculating the remaining amount of fuel.

The icebreaker set sail on Jan. 19 from near the Syowa Station research base. It was carrying members of the wintering party of the 61st Japanese Antarctic Research Expedition, who had stayed at the station for more than a year, and the summer party of the 62nd expedition team, who entered Antarctica in December last year.

Commanded by Captain Shusaku Takeuchi, the Shirase on the morning of Jan. 23 moved from an area covered in ice and penguins and headed toward cobalt blue waters.

The 62nd expedition team was hit by a series of extraordinary challenges, including the cancellation of the training camp in Japan and isolation of members before departure to the frozen continent.

One month after they arrived in Antarctica, they took over observation duties and the Syowa Station from the 61st expedition team and replaced the predecessor wintering party on Jan. 19.

“We couldn’t have made it to this day amid the coronavirus pandemic without support from many people,” said Toshihiro Abo, 59, leader of the wintering party of the 62nd Japanese Antarctic Expedition.

Motoshige Date, 42, a member of the 62nd expedition team in charge of air observation activities, said he had always been fascinated by Antarctica.

The 20th-generation leader of the Watari Date clan applied for the job when he was a curator at the Date City Museum of History and Culture in Hokkaido.

“I thought it was the only chance to make my dream come true,” he said. “I’m looking forward to spending the winter (in Antarctica).”

In the short summer months, Date conducted observations around the coastal areas of the continent in a helicopter with his predecessor.

A wintering party usually replaces the previous team on Feb. 1.

But a decision was made for the Shirase to leave early to avoid the thicker sea ice and accumulated snow caused by an increased frequency of snowstorms as winter approaches. Under those conditions, the vessel would need a large amount of fuel for ice-breaking operations.

The Shirase must reduce fuel consumption especially for the trip to Japan.

In an area covered with fast ice extending from the coast, the ship repeatedly backed up to gain forward momentum to ram through the ice. The Shirase could only travel several hundred meters in one hour when the ice was several meters thick. The ship had to anchor on Jan. 21 because of a snowstorm and low visibility.

The following morning, the Shirase struggled to break the ice because of the accumulated snow. It took several hours for the vessel to travel about 5 kilometers. Adelie and emperor penguins, as well as seals, showed themselves when the ship reached the fast ice edge.

With the help of the Shirase crew, the team members collected sea water, plankton and other samples and started observations of the seabed topography and other environmental factors.

They also retrieved a pressure manometer placed on the seafloor two years ago to collect data.