EDITORIAL: Suga’s handling of scandal involving his son test of his leadership 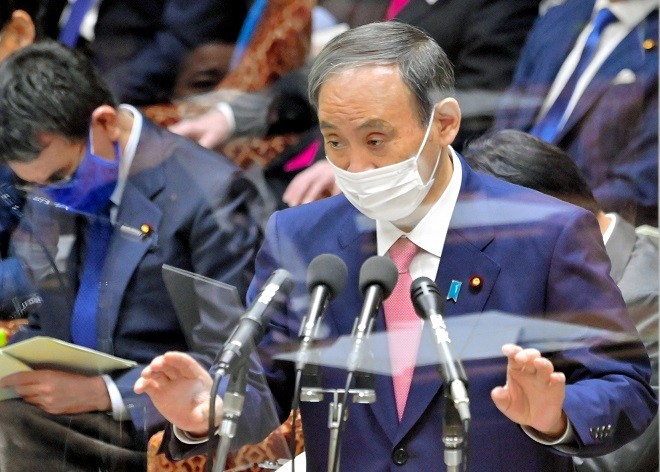 Prime Minister Yoshihide Suga is known for placing great value on self-help and takes a dim view of lawmakers' offspring who win their Diet seats by capitalizing on the political influence and social status of their parents.

How Suga responds to allegations that his son and other employees of a well-known visual media production company wined and dined senior bureaucrats at the telecommunications ministry will be a test of his political integrity.

Suga should understand that his handling of this potential corruption scandal could raise serious questions about his commitment to his political creed if he decides it has nothing to do with him because his son is a “different individual.”

The weekly magazine Shukan Bunshun reported that Yasuhiko Taniwaki, the vice minister for policy coordination at the Ministry of Internal Affairs and Communications, and three other top ministry officials dined with Suga’s eldest son and other executives of Tohokushinsha Film Corp., a Tokyo-based company that produces TV programs and satellite-based broadcasting. The dinners took place on four separate occasions from October to December last year. The bureaucrats did not pay for their meals, nor did they report the dinner to the ministry, according to the Bunshun expose. In addition, they accepted gifts and taxi tickets from the company officials.

The ministry, working with the National Public Service Ethics Board of the National Personnel Authority, has started investigating allegations of a possible violation of the ethics code for central government employees.

The ethics code prohibits central government employees from being treated by stakeholders, such as having a free meal or receiving money or gifts. They are allowed to take meals with stakeholders as long as they pay own way but are required to notify the respective ministries and agencies in advance if the dinner session is a work-related matter that costs more than 10,000 yen ($94.80).

The four did not notify the ministry in advance about the dinners and only did so after they were interviewed about the sessions by Bunshun.

One of the four bureaucrats, Yoshinori Akimoto, director-general of the information and communications bureau, attended a Lower House Budget Committee session to answer questions about the matter. Akimoto admitted to having been wined nd dined by Tohokushinsha, but said he was not aware that stakeholders were present.

His explanation was far from convincing. The four officials recently paid the company for the cost of the dinners and returned money for the gifts and taxi rides. But Akimoto refused to disclose the sums they paid, citing the ongoing investigation.

The revelations threaten to damage public trust in the fairness and neutrality of the administration. The ministry should undertake a thorough investigation into the matter to answer key questions, such as why the senior bureaucrats accepted invitations to these wining and dining sessions, whether there were more sessions than the reported four occasions and whether policy decisions were affected in any way. Then, the ministry should implement strict disciplinary action against them based on the findings.

Suga’s responses to the revelations are baffling.

He has left the job of ascertaining the facts entirely to the ministry. While he spoke with his son about the magazine article over the phone, all he did was to tell him to “cooperate with the fact-finding investigation” by the company. Suga did not even ask his son whether the report was factually accurate.

When he was minister, he appointed the oldest son as a secretary. Suga stresses that his son is now a “private citizen” who does not hold public office. However, his son is inevitably regarded by ministry officials as someone closely linked to the prime minister.

A series of political scandals that dogged the Abe administration, including those related to Moritomo Gakuen, the Kake Educational Institution and cherry blossom viewing parties, have one factor in common. They all raised suspicions that people close to the leader enjoyed unfair benefits and that bureaucrats, who should act as “servants of the whole community,” supported the corrupt nexus.

If the revelations mean that Suga’s political influence was used for unfair advantages not available to the general public, public trust in politics and the government will be undermined.

Suga should take the possible implications of the matter seriously and provide effective leadership in clarifying the facts.