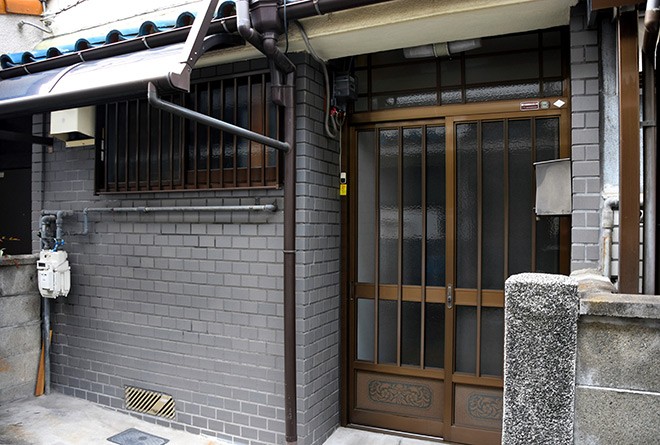 A house in Takaishi, Osaka Prefecture, where a woman starved to death and her son was weakened from malnutrition in 2020 (Issei Yamamoto)

TAKAISHI, Osaka Prefecture—The water meter kept running and the indoor lights were on at a house believed to have been left “unoccupied” after the homeowner in his 70s died five years ago.

City officials could find no heir to the property.

But on the morning of Sept. 22 last year, a neighbor reported to prefectural police that a corpse was inside the house. The skeletal remains of an elderly woman were found lying on a bed, and a police autopsy determined she had died of starvation.

She was the common-law wife of the deceased homeowner. Her son, who was also living in the house, was found emaciated and taken into protective custody.

Both the woman, estimated at 78 years old, and the son, 49, were never entered into the family registry in Japan for unknown reasons. Perhaps because they did not technically “exist,” they never sought help from their neighbors or local government offices.

In 1999, the father, the only family member who was registered, bought the two-story wooden house that was built more than 50 years ago in a residential area of the city center.

The woman and her son used to hold part-time jobs, but they were apparently out of work in recent years. They relied on the man’s inheritance for their living needs after he died in 2016.

According to city officials and other sources, the son said that they fell short of living expenses and survived on only water and salt after they had “somen” noodles in late August.

He said he was watching over his weakening mother but was hesitant to call an ambulance, contact the city office or seek other help because they had no family registration, the sources said.

Those around them found nothing unusual about the elderly widow and her middle-aged son. She was often seen cleaning up around the house and had a good relationship with the neighbors, offering them rice cakes and sweet sake during the New Year holidays.

She continued to pay the monthly dues for the neighborhood association until August, and no one seemed to notice the poverty of the household.

According to sources, the son said his mother was born in the Goto Islands in Nagasaki Prefecture and was orphaned during World War II.

The family of three originally lived in an apartment complex in another part of Takaishi. The son didn’t attend elementary and junior high schools, and instead studied under the tutelage of his mother.

“The son’s parents were both gentle, and he was a kind child who never spoke ill of others,” said a 50-year-old company employee who had frequently played with the son when they were small.

“I never knew they were unregistered,” said the former neighbor who was once invited for a meal at the family’s house. “I just feel so bad.”

The head of the neighborhood association who lives nearby also expressed regret for what happened.

“I wish they had come to us for help much sooner,” he said. “They might have had feelings of guilt for being unregistered.”

According to those close to the matter, the son is currently receiving medical treatment and is preparing to create an individual “koseki,” or family registration, to be legally recognized as a citizen.

The Takaishi city government accepted the death notification of the father, who had a family registration and a registered residence.

Under the resident registration system, he was a homeowner who lived alone, and his death left the house unoccupied, according to officials at the citizens’ affairs division.

The officials said they are not required to check if other people live in a house or look into other details when they receive a notification of death.

Although various other sections of the city government had some involvement with the mother and the son, their presence was overlooked for years.

A city public relations official explained that the law prohibits personal information obtained by an administrative organ from being used by another division beyond the original purpose.

“No city officials had come into contact with the two,” the official said. “It was difficult for us to learn about them because there are many people who hide the fact that they are unregistered.”

The central government estimates that about 900 people in Japan do not have a family registration.

According to the Justice Ministry, birth notifications for 70 percent of them were not submitted to authorities because the parents wanted to avoid application of a much-criticized provision of the Civil Law. It states that a child born to a woman within 300 days of her divorce is considered the child of her former husband.

A Tokyo-based civic group that supports families with unregistered children estimates there are about 10,000 such people in the country.

Some of them were not registered because they were born in the turmoil during and after World War II. Others have lost their registrations.

Masae Ide, who heads the group, points out the danger of unregistered people growing old and falling through the safety net of welfare and other public support.

“I hope the central and local governments strongly recognize that the case involving the mother and the son is just the tip of the iceberg,” Ide said.

Many people who are unregistered believe that they are “illegal and wrong,” so they are hesitant to ask neighbors or administrative offices for help, she said.

“Although they are unregistered, they still can receive various support and administrative services, including livelihood assistance,” Ide continued. “I encourage them to seek help from support groups and municipal governments.”