Letters to our former selves; what survivors of 3/11 wrote 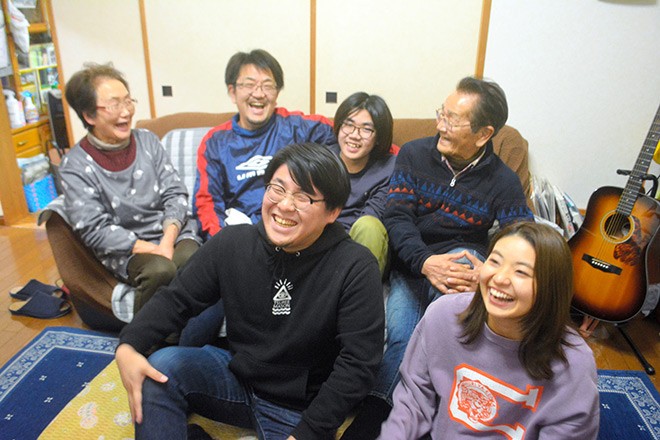 The Makinos in their new home in Ishinomaki, Miyagi Prefecture, in January: From left, back row, Shizuko, Teruyoshi, Shunji and grandfather Teruo. Daisuke and Hisa are in the front row. (Hideaki Ishibashi)

Daisuke Makino recalled he was overwhelmed with grief and feeling the burdens of the world thrust upon his young shoulders when he wrote to himself as part of a project to cope with personal tragedy.

His turmoil stemmed from losing his beloved mother and the family home in Ishinomaki, Miyagi Prefecture, in the towering tsunami generated by the magnitude-9.0 Great East Japan Earthquake that devastated the Tohoku region of northeastern Japan.

He looked back on his struggle to move on in a letter to his former self.

Makino is now a senior at Tohoku Gakuin University in Sendai, Miyagi Prefecture. His account is part of “Bereavement,” a book published by Shinyosha in January that compiled 31 letters written by survivors of the life-changing events of March 11, 2011.

Makino, 21, recalled how he also felt overcome by the enormity of his responsibility following the apparent loss of both parents.

Makino was only a sixth-grader in elementary school when his mother Mariko, 40, was swept away by tsunami that destroyed the family home.

He managed to hold back tears when he was finally able to see his mother’s body. As the oldest of three children, Makino was determined to take on the role of head of the family as the whereabouts of his father, Teruyoshi, a civil servant, was unknown at the time.

The family was able to build a new home at a different location in Ishinomaki, and his grandmother took care of all household chores, along with matters relating to his schooling.

But Makino often found himself arguing with his grandmother, Shizuko, over trivial matters.

“Your mother is watching you,” he recalled his grandmother saying to him to bring him to heel.

Makino felt deep regret over his behavior toward his grandmother and wrote in the letter to his former self: “You should not let yourself become saddled with a sense of responsibility all by yourself. You may feel it is so huge that you want to vent your frustration on others. When you feel like it, please take a moment to calm yourself and look around.”

As he grew older, Makino gained a deeper insight into the person he really was. He realized he was not a natural leader and wanted his 12-year-old former self to simply be allowed to have a normal childhood and get on with things at his own pace.

Letters by Makino and other survivors were collected by students who attended a workshop at the university when Kiyoshi Kaneyoshi, researcher of environmental sociology, taught there.

Makino’s elder sister Hisa was a first-year student at junior high school when the disaster struck.

Her way of coping was to devote herself to extracurricular activities at school so aggressively she had little time to grieve. She threw herself into her studies and obtained a license to become a judo therapist.

Years later, she had a mental breakdown and had to quit her job. Hisa candidly described her turmoil in one letter.

Hisa clings to the thought that there are things she realized only after she suffered a breakdown. She became aware of the deep love and support that people around her had given her since the disaster. But she was never able to fully convey her gratitude to them.

“Don’t make haste, and take time to stand still sometimes,” she wrote to herself.

Makino’s brother, Shunji, was 8 years old when the disaster struck. He recalls little about the disaster that transformed his family’s life. Still, writing to himself a decade ago provided an opportunity to gain a better grasp.

“When you take a family trip, make sure you take a photo of your mother,” he wrote.

Makino’s father, Teruyoshi, was reunited with his three children 10 days after the tsunami. He marked the occasion by pledging to them to protect them no matter what it cost. Ever since, he has made frantic efforts to raise them.

“To yourself 10 years ago: You should suffer a great deal based on the pledge,” he wrote. “But you will find yourself proudly declare ‘I am happy now’ after you follow the path that you believed in and followed.”

Among the other letters is one by a young man: “Say to your father (on the morning of March 11, 2011) that today’s fried egg was the best he has ever cooked and you will see him later.”

He wanted to say that because it was the last time he saw his father.

A woman who lost her parents in the disaster wrote: “You should tell your parents to make sure that they flee immediately if a big jolt hits.”

Makino said the book project helped him realize that even his own family members all felt differently as they tried to cope and rebuild their lives together.

The letters, of course, would never reach their former selves. But scribbling a letter to who they were then was extremely meaningful when they tried to put things in perspective, Makino said.