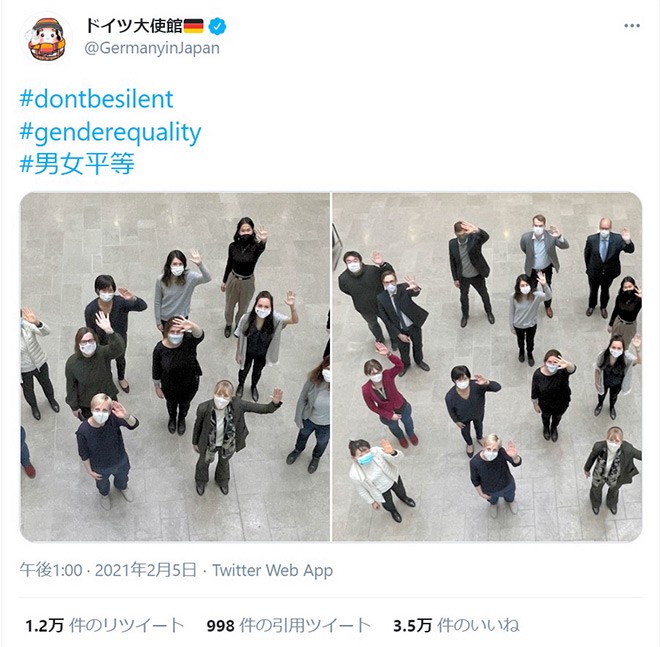 The German Embassy’s official account posted those hashtags on Twitter at 1 p.m. on Feb. 5 with an image of more than a dozen staff members raising their left hands in protest.

Mori, a former prime minister, triggered the ruckus by saying that “competitive” women prolong meetings with their need to talk.

The embassies of Finland, Sweden, Ireland and Portugal, as well as the delegation of the European Union to Japan, followed suit with images of their own, also taking their posts to Instagram, Facebook and other social media sites.

Later the same day, the United Nations Information Center in Tokyo shared its message both in Japanese and English, including “Speak up when someone crosses the line,” and “Let’s not allow silence to be compliance to the patriarchy” in its posts on Twitter.

People who viewed the posts said they were encouraged to speak out.

“Thanks for giving me courage,” said one.

“I thought that I had to endure (Mori’s comment) in silence. But now I feel like I don’t need to from now on as I was inspired by people I have never even met before,” said another.

Mori made the contentious remark Feb. 3 at an extraordinary meeting of the Japan Olympic Committee Council. He stated that he was offering his “private opinion” about the JOC’s policy to increase female members of sports organizations’ executive boards to 40 percent or more.