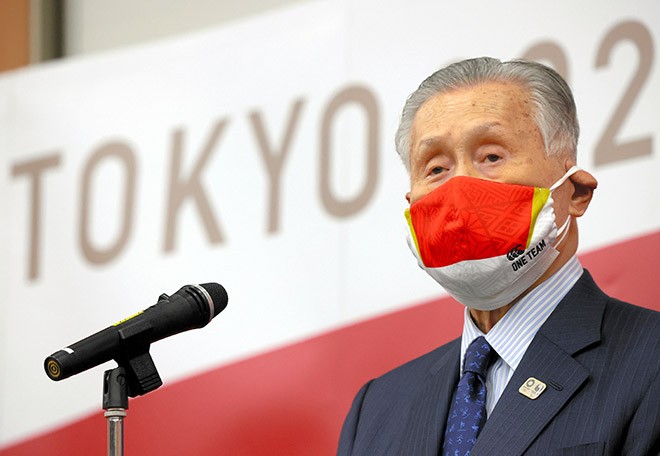 Yoshiro Mori, president of the Tokyo Organizing Committee of the Olympic and Paralympic Games, speaks in Tokyo in December. (Pool)

Yoshiro Mori’s political career has been littered with gaffes.

His remarks, seemingly a random mix of verbal lapses, appear to reveal a set of values behind them: a disregard for debate and persuasion. Both are vital elements of politics.

While he was prime minister, Mori made a comment about unaffiliated voters ahead of a Lower House election.

“It would be better if they simply sleep through (the election day), saying they are not interested.”

He sounded as if he had no interest in making efforts to win the support of voters with his policies.

That underlying attitude also seems to be behind his recent comment about women: “A meeting of the executive board (of a sports organization) that includes many women would take time.”

The primary problem is that he is seeing things from the outset with prejudiced ideas about women and men. At the same time, his remarks almost suggested that meetings are better off without serious discussions.

In Japanese organizations, including those in the political community, leaders who are adept at building consensus through coordination, such as Mori, have traditionally been favored.

Instead of encouraging open, lively discussions, they listen to the demands from influential figures and produce a compromise to all parties involved, while laying the groundwork to ensure that those decisions will be accepted.

As for the Tokyo Olympics, organizers should have encouraged public debate last year on whether to postpone or cancel the event by clarifying the pluses and minuses of both options.

Even now, no Plan B has been presented, and only empty arguments that indicate the “we can do it if we really want” kind of mindset have been heard.

The message appears to be that people should remain silent because the necessary coordination will occur behind the scenes.

Mori’s remarks on women have triggered a wave of online responses with such hashtags as “#wakimaenai onna tachi" (women who do not know how to conduct themselves) or “#DontBeSilent.”

These comments also represent protests against many organizations that still operate with behind-the-scenes consensus building by men.