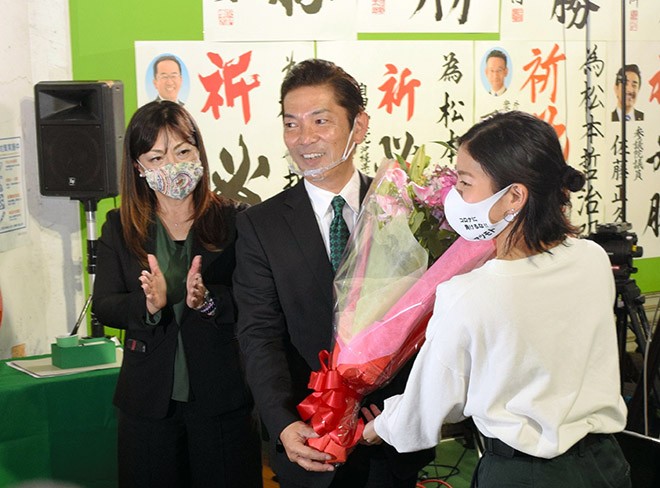 URASOE, Okinawa Prefecture--Tetsuji Matsumoto, the incumbent mayor here, won his third term on a pledge to support the relocation of a military port facility to the city, despite having flip-flopped on the issue twice.

Matsumoto, 53, ran as an independent candidate backed by the ruling Liberal Democratic Party and its coalition partner, Komeito.

Irei, 38, a rookie mayoral candidate, also ran as an independent, and had won support of Okinawa Governor Denny Tamaki, the local Okinawa Social Mass Party, along with the opposition parties the Constitutional Democratic Party of Japan, the Japanese Communist Party, and the Social Democratic Party.

A central theme throughout the election was whether the U.S. military’s Naha Port facility should be transferred from Naha, the prefecture’s capital, to Urasoe. Irei opposed the relocation plan, while Matsumoto supported it, insisting that it has “merits for the prefecture’s economic growth.”

His mayoral victory is expected to allow the administration of Prime Minister Yoshihide Suga to expedite the relocation.

Matsumoto originally came into office opposing the relocation of the military port facility. But he later started to come around to the idea and proposed his own plan, and he won a second term. Last summer he withdrew his own proposal and began to accept the current plan.

Critics have since accused him of breaking his campaign promises two times over.

“I would like to gradually ease the excessive burdens of the military base,” Matsumoto said.

Tamaki had called for support for Irei during the election, but that only served to reveal the wide gap between the governor and his own supporters over the issue, and his endorsement seemingly failed to sway voters.

“So, I need to start by checking with what the governor really wants,” Matsumoto said.

The Suga administration showered support over Matsumoto’s re-election bid, managing to avoid a second defeat in mayoral races in the prefecture after losing the Miyakojima mayoral election in January.

Suga dispatched his secretary and LDP officials to Urasoe to support Matsumoto, just like he did during the Miyakojima mayoral election, and the Urasoe results have put his administration on a sound footing in the lead up to the gubernatorial election in the fall next year.

Suga has been at odds with Tamaki over transferring U.S. Marine Corps Air Station Futenma from Ginowan in Okinawa Prefecture to the Henoko area of Nago and has confronted him over the issue.

(This article was written by Mika Kuniyoshi and Shinichi Fujiwara.)