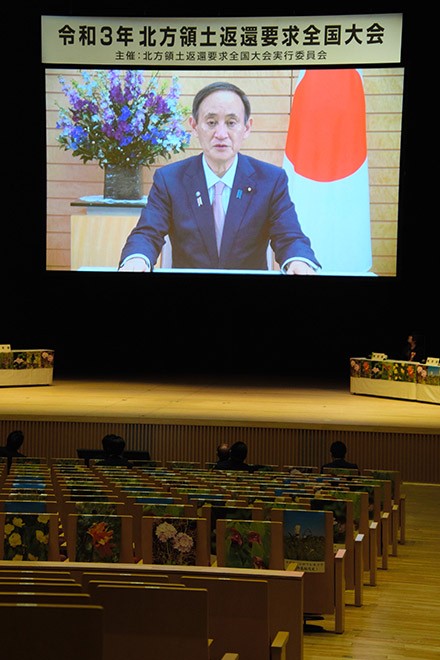 A pre-recorded video message by Prime Minister Yoshihide Suga is shown at the Feb. 7 national rally in Tokyo demanding the return of the disputed Northern Territories. (Tatsuya Sato)

Japan resurrected a tougher stance over the disputed Northern Territories at its annual rally to demand Russia return the four islands off Hokkaido, amid stalled negotiations between the two nations.

The national rally, held in Tokyo on Feb. 7, Northern Territories Day, approved a statement saying that Russia has been occupying the islands, which Soviet forces seized at World War II's close, without any legal basis.

Statements at rallies since 2019 had been toned down under the administration of former Prime Minister Shinzo Abe following an agreement with Russian President Vladimir Putin to accelerate talks for a peace treaty.

But the latest version returned to stronger language used before 2019 due to little progress in negotiations.

“I will continue to steadily move negotiations forward based on agreements that have been reached between the two countries,” Prime Minister Yoshihide Suga said in a video message sent to the rally.

But Suga did not mention the Japanese government’s basic position that it will resolve the territorial issues off Japan's northernmost main island and sign a peace treaty with Russia.

Abe and Putin agreed at a November 2018 meeting to speed up peace treaty talks based on the 1956 Joint Declaration between Japan and the Soviet Union that stated only the Habomai islets and Shikotan would be handed over to Japan after a peace treaty was concluded.

The move marked a major shift in Japan's stance, as it had long insisted on the return of all four islands. The words “illegal occupation” have been dropped from the statement since the 2019 rally.

This year’s statement did not mention “illegal occupation,” either, but it stated that “it is extremely regrettable that the four islands have remained occupied (by Russia) for 75 years without any legal basis.”

The statement since 2019 has also expressed Japan’s determination to “seek a resolution of the territorial issues.” The latest version, however, included that the country “aims to realize the return of the four islands.”

“In 2019 and 2020, the rally refrained from adopting wording that could upset the Russian side (in the statement) so as not to negatively impact bilateral talks,” a source close to the rally’s executive committee said. “This year’s statement used stronger expressions in light of stalled negotiations.”

Russia has also taken a tougher stance toward the Northern Territories. In July, wording was added to the Russian Constitution that banned ceding territory to another nation.

Suga and Putin, partly due to the COVID-19 pandemic, have not met in person since Suga became prime minister in September last year.