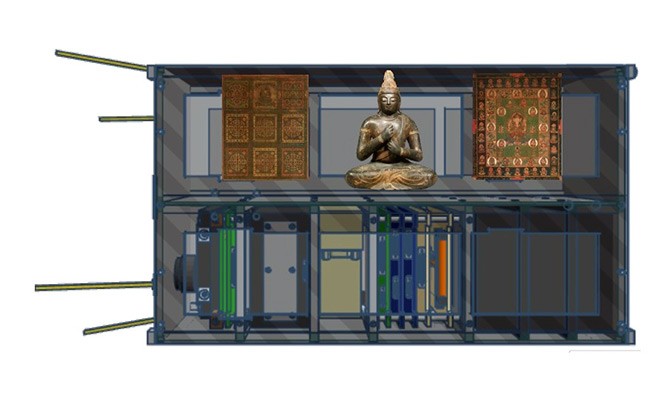 A rendition of the satellite carrying the Jotenin Gounji space temple (Provided by Terra Space Inc.)

KYOTO--Daigoji temple here plans to let worshippers pray for world peace from the heavens through a “space temple” scheduled for launch in 2023.

The first trial “space Buddhist memorial services” were held at the temple on Feb. 8.

For the actual journey to space, a Buddha statue of Dainichi Nyorai and Mandala paintings will be enshrined in a satellite measuring 20 centimeters in length, 30 cm in width and 10 cm in depth, according to the plan.

Temple monks will pray for peace when the satellite orbits Earth. It will be able to circle the planet every 90 minutes at a height of about 400 to 500 kilometers.

After the temple accepts wishes from worshippers, it can transfer them to the satellite to allow peace prayers “from the wide perspective of space.”

A special app will display the satellite’s position so that worshippers know when to pray toward the sky.

The satellite will also allow the temple to communicate with temples in mountainous areas with no mobile reception during times of disaster.

The space temple has been named Jotenin Gounji temple, which can mean “extremely long time” and “human existence.”

During the Feb. 8 memorial services, Yuga Kabese, head regent of Daigoji temple, and other monks prayed for peace in all space and the elimination of viruses.

The temple said it will continue to hold such services.