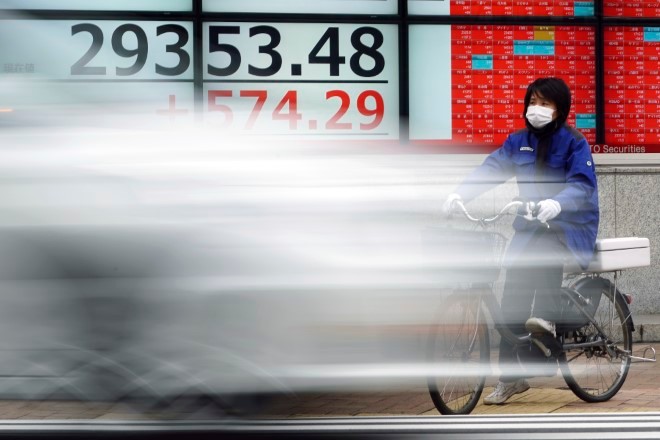 A woman wearing a protective mask rides a bicycle in front of an electronic stock board showing Japan’s Nikkei 225 index at a securities firm on Feb. 8, in Tokyo. (AP Photo)

Analysts expect the world economy to grow this year after contracting last year because of the pandemic. Export-driven Asian nations, such as Japan, South Korea and China, are expected to get a big boost out of the recovery.

Investors have been encouraged by surprisingly good corporate earnings reports, news that a recent surge in new coronavirus cases is easing, and progress in the distribution of vaccines.

In Asia, some companies have been slammed by the effects of border controls and remote working over COVID-19. But others have been big gainers, such as Japanese video-game company Nintendo Co. People stuck at home have turned in droves to Nintendo games, and the company, which has struggled at times, appears to be headed toward a record profit for the year.

Venkateswaran Lavanya of the Asia & Oceania Treasury Department at Mizuho Bank noted that euphoria was mixing with reality checks about vaccines slowly being delivered around the world.

“South Korea is relaxing social distancing measures, while Japan is considering lifting the emergency in certain prefectures if the situation improves,” Lavanya said of the other positive developments for the economy.

“Against this backdrop, the Japanese stock market is set to close at its highest since 1991," she said.

On Wall Street, the S&P 500 ended the week notching its fifth gain in a row and its biggest weekly increase since November. The benchmark index rose 0.4 percent and ended the week 4.6 percent higher, more than making up for its decline in January. The latest gain nudged the S&P 500 to another all-time high.

The Nasdaq composite also capped the week with a record high. Small -company stocks fared even better than the broader market, a sign that investors are feeling more optimistic about the economy.

Investors are focused on the prospects for more stimulus. President Joe Biden urged Democratic lawmakers this week to “act fast” on his economic stimulus plan.

In energy trading, benchmark U.S. crude rose 51 cents to $57.36 a barrel in electronic trading on the New York Mercantile Exchange. It gained 62 cents on Friday to $56.85 per barrel. Brent crude, the international standard, added 47 cents to $59.81 a barrel.