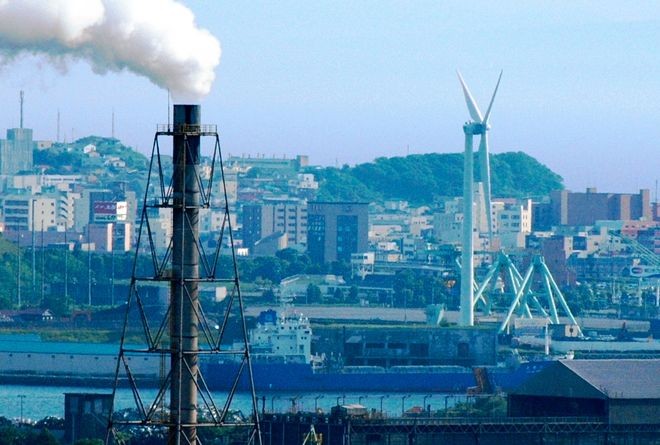 A windmill for wind power generation stands near the chimney of a steel mill in Muroran, Hokkaido Prefecture, in 2010. (Asahi Shimbun file photo)

With the threat of global warming at such an urgency that experts are warning about a “climate crisis,” this is no time for debating whether to introduce a plan to reduce carbon emissions by putting a price on them.

The government should act on the assumption that the need for such a system is indisputable and swiftly design a carbon pricing system that can achieve both a carbon-free future and economic growth.

Carbon pricing means imposing charges on carbon dioxide emissions as a financial incentive for polluters to cut down on the amount of greenhouse gases they produce.

A subcommittee of the Environment Ministry to discuss the topic recently restarted its work, a move to achieve the administration’s target of net zero greenhouse gas emissions in 2050.

The Ministry of Economy, Trade and Industry plans to soon set up a study group to discuss the issue.

Finland blazed the trail in 1990 by introducing a carbon tax on CO2 emissions. As of April 2020, 46 countries and 32 areas had adopted carbon pricing.

The European Union, which introduced a cap-and-trade system of emission allowances for industry in 2005, has seen significant growth in corporate investment for technological innovations to reduce greenhouse emissions.

Due to this approach to carbon pricing, which allows greenhouse gas producers to trade permits to emit pollutants issued by the government, the EU’s CO2 emissions declined by about 20 percent during the 2004-18 period while the region continued economic growth.

As it has been putting off adopting a full-fledged carbon pricing system, Japan cut its emissions by only about 9 percent during the same period.

Debate on carbon pricing also grew in Japan after the Kyoto Protocol, an international agreement to reduce greenhouse gas emissions, was adopted in 1997. In 2012, Japan introduced a new levy to promote measures to stem global warming, which is a type of carbon tax.

But the tax rate is a puny 0.76 yen per liter of gasoline, less than one-10th of the typical carbon tax rates in other countries on a carbon-equivalent basis.

The tax will reduce Japan’s CO2 emissions by only 0.2 percent between 2013 and 2030, according to an estimate by the Environment Ministry.

A cap-and-trade program has been adopted by Tokyo and Saitama Prefecture, but they only cover such specific facilities as commercial buildings and factories.

Behind Japan’s slowness in embracing the idea is the reluctance of the business community and the economy ministry to support it.

Japan Business Federation (Keidanren), the nation’s most influential business organization, has been opposed to this approach. It argues a tax levied directly on CO2 emissions would eat into companies’ resources for research and development, thereby undermining their international competitiveness.

While Japan is dragging its feet, the world is rapidly changing. The EU plans to introduce a “Carbon Border Adjustment Mechanism” as early as 2023, which would impose a tax on imports from countries exhibiting poor performance in cutting CO2 emissions. U.S. President Joe Biden has promised to introduce a similar measure.

The environment and economy ministries should work together to develop a carbon pricing system suitable for the realities in Japan.

If a carbon tax is to be introduced, the various existing energy levies with different purposes and rates, including the gasoline tax and the tax to promote power sources development, should be consolidated from the viewpoint of slashing CO2 emissions.

There is no room for competition among ministries for tax sources.

To stimulate corporate efforts to reduce the amounts of CO2 they emit into the environment, it would be better to put the same price on all CO2 emissions. But this could put an excessively heavy burden on the power and other industries that depend heavily on fossil fuels.

The government needs to consider proper transitional measures under a clear vision for a low carbon future.