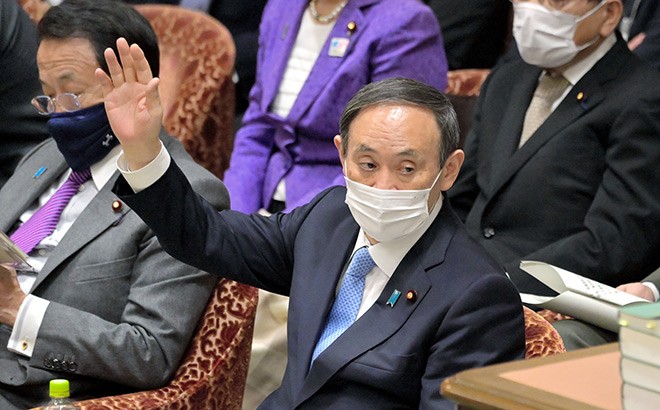 Prime Minister Yoshihide Suga said the sexist remarks by Yoshiro Mori, chief of the Tokyo Olympic organizing committee, were bad for Japan’s interests but refused to enter the fray over whether Mori should resign.

“They are completely in conflict with the Tokyo Olympic and Paralympic Games’ important principle of gender equality and should not have been said,” Suga said at a Feb. 8 meeting of the Lower House Budget Committee. “That’s is my take of his comments.”

He also said Mori’s remarks were “not favorable to Japan’s national interests.”

Yuki Waseda, a lawmaker with the main opposition Constitutional Democratic Party of Japan, pressed Suga for his opinion on whether Mori should remain at the post.

The prime minister said he is not the one to decide.

“The organizing committee decides personnel matters,” he said. “I am in a position to respect the decision by the committee as an independent entity.”

Mori, a former prime minister and current president of the Tokyo Organizing Committee of the Olympic and Paralympic Games, sparked outrage from within and outside Japan for saying that women are “competitive” and prolong meetings because they are eager to have their opinions heard.

At an extraordinary meeting of the Japan Olympic Committee Council on Feb. 3, Mori said he was giving his “private opinion” about the JOC’s policy to increase female members of sports organizations’ executive boards to 40 percent or more.

The online meeting was shown to media representatives. They heard Mori say that meetings of such boards with many female members would take time because of their need to talk. He also indicated that time limits may be needed on talks by board members.

On Feb. 4, Suga expressed regret over Mori’s comments at the Lower House Budget Committee meeting, saying, “They should not have been said.”

That day, Mori apologized and retracted his comments.

But the backlash has continued, and calls are growing for the 83-year-old Tokyo Olympic organizing chief to step down.

Nearly 400 people who signed up as volunteers for the Tokyo Olympics rescheduled for this summer have expressed their intention not to work at the event in protest of Mori’s remarks.

Mori, however, has received some support from within the ruling Liberal Democratic Party.

Hiroshi Moriyama, chairman of the LDP’s Diet Affairs Committee, indicated that Mori should stay in the post.

“Mori regretted what he said and retracted his remarks,” Moriyama told reporters. “As the Olympics are just around the corner, it will be better for him to continue with his job.”