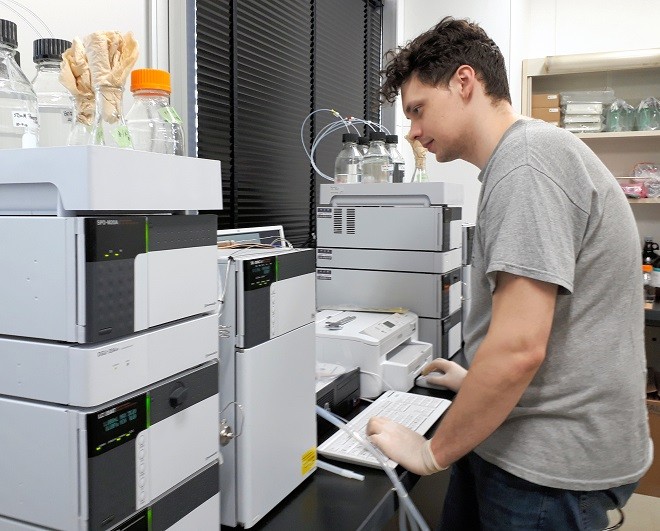 A researcher at the Institute of Biomedical Research and Innovation in Kobe studies age-related changes in the brain. (Asahi Shimbun file photo)

Gerontology researchers are racing to unravel the mechanisms of how humans age, with the goal of developing medicines and nutritional foods that can extend the healthy life spans of humans.

“It's no longer science fiction but an attainable goal to develop anti-aging methods and extend healthy life expectancy,” said Yoichi Nabeshima, a professor emeritus at Kyoto University and chairman of the Institute for Research on Productive Aging (IRPA).

The IRPA, modeled after a private research institute in the United States, kicked off its activities last year with the mission of developing anti-aging methods by studying the mechanisms of aging and longevity.

Aging is the biggest factor that raises the risk of cancer, heart disease, diabetes and Alzheimer’s disease. It is widely considered unavoidable that people become more likely to develop diseases as their physical functions decline with age.

But research is accelerating to find a way to slow the aging process itself to lower the risk of developing many diseases all together.

Shinichiro Imai, a professor of gerontology at the Washington University School of Medicine and an executive board member of the IRPA, found a substance that suppresses age-associated symptoms, such as a rise in blood-sugar levels and decline in bone density, in an animal experiment.

The substance, called nicotinamide mononucleotide (NMN), exists in the human body, but decreases in number with age. Research is under way to study the effectiveness of NMN as a nutritional supplement in humans. Research related to NMN will also be conducted at the IRPA.

The IRPA, based on Kobe’s Port Island, is jointly developing medicines and nutritional foods with companies that are scientifically proven to be effective against aging. The organization also provides an environment for its members to seek advice from researchers overseas.

AutoPhagyGO Inc., a startup affiliated with Osaka University, was established in 2019 to use findings by researchers at the university to help extend the healthy life spans of humans.

Autophagy is a natural mechanism that destroys and recycles components in cells to eliminate damaged proteins and organelles. Yoshinori Ohsumi, an honorary professor at the Tokyo Institute of Technology, won the Nobel Prize in Physiology or Medicine in 2016 for his discoveries of the mechanism.

Autophagy declines with age, according to Tamotsu Yoshimori, a distinguished professor of cell biology at Osaka University, who serves as a technical adviser to AutoPhagyGO. The firm aims to reactivate autophagy to help slow aging, prevent age-related diseases and improve symptoms of such ailments.

Why do our physical functions deteriorate with age? A decline in the function of mitochondria, a cellular structure that acts as an energy source, has been reported to be one factor, but more researchers are focusing their attention on “senescent cells,” which accumulate in the body as we get older.

Senescent cells can no longer divide mainly due to DNA damage in cells. Studies show that the number of senescent cells increases with age. Recent findings have also revealed that they secrete substances that cause inflammation around the cells, leading to the development of arteriosclerosis and cancer.

Researchers established a hypothesis that eliminating senescent cells from the body using medicines may help prevent or treat age-associated diseases. Studies are already under way in the United States to confirm the safety and efficacy of senolytics, a class of drugs designed to remove the cells, in humans.

A research group led by Eiji Hara, a professor of molecular microbiology at Osaka University, found that mice who gained weight after eating fat-rich foods had more senescent cells in their livers, making them more likely to develop liver cancer.

The group then spent five years identifying a substance that could remove senescent cells in a joint study with a pharmaceutical company. The study showed that administering the substance to mice with a high risk of liver cancer can reduce the number of senescent cells in their bodies and lower their cancer risk.

The researchers also administered the substance to mice who received a chemotherapy drug after undergoing a transplant of human cancer cells. They found the substance helped enhance the drug's efficacy.

“The development of a drug that selectively destroys senescent cells may help prevent age-related diseases and extend healthy life expectancy,” said Hara, who is conducting further studies into senescent cells.

Another research group, led by Masataka Sugimoto, who heads the Section of Biochemistry at the National Center for Geriatrics and Gerontology (NCGG), confirmed in a 2016 experiment that eliminating senescent cells from the lungs of mice helped restore their pulmonary functions.

But further studies are needed into the possible negative impact from removing senescent cells since it remains largely unknown what roles those cells play in the body, according to the group.

Research is ongoing into drugs that slow aging and extend life expectancy, including senolytics, NMN, rapamycin, an immunosuppressant drug used in organ transplants, and metformin, a drug used to treat diabetes, according to a report by the Center for Research and Development Strategy (CRDS).

The CRDS is a think tank affiliated with the Japan Science and Technology Agency that conducts research into the nation’s science and technology policy measures.

Japan’s population is rapidly graying. Currently, citizens aged 65 or older account for 29 percent of the population, and the ratio is projected to rise to 35 percent by 2040.

“Japan is an aging society facing ballooning medical costs for elderly people, so it is crucial to carry out further studies into aging in the country," the IRPA's Nabeshima said.

Anti-aging drugs and substances in development

Senolytics
A class of drugs that remove senescent cells, which secrete substances that cause inflammation, from the body.

Nicotinamide mononucleotide (NMN) and others
Substances that decrease in number with age. Animal experiments confirmed their anti-aging effects.