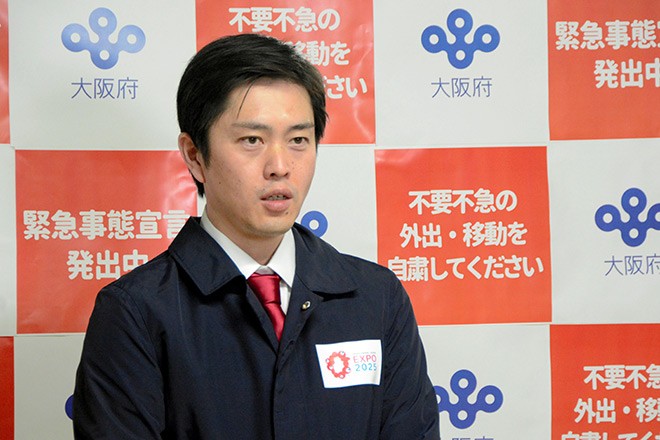 OSAKA--Osaka on Feb. 8 met the drop in daily new COVID-19 cases benchmark it set of an average of 300 or fewer for the previous seven days, allowing it to ask the central government to lift the prefecture's state of emergency.

Osaka Prefecture on Feb. 1 decided on criteria that would permit it to request the lifting of the state of emergency. For seven days in a row, its average number of new daily cases for the past week has to be 300 or under or the occupancy rate for beds for patients with serious symptoms has to be below 60 percent.

The occupancy rate for beds for patients with severe symptoms has also been declining steadily, but it was 63.1 percent as of Feb. 7.

Osaka will decide whether it will actually make the request after discussing the matter with Kyoto and Hyogo prefectures, which were also placed under the state of emergency at the same time, and listening to the opinions of experts.

“The number of new patients has been dropping steadily,” Osaka Governor Hirofumi Yoshimura told reporters on Feb. 8. “I would like to make a decision after I listen to what experts will say tomorrow," referring to a meeting of Osaka's COVID-19 task force on Feb. 9.

“If possible, I want to make the request along with Kyoto and Hyogo,” he said. “I do not assume that Osaka will do it alone.”

Kyoto and Hyogo prefectures have not met their own required benchmarks for requesting the state of emergency be lifted.

Kyoto also set two conditions. Its average number of new daily cases for the previous seven days has to be under 50; and the occupancy rate for beds for patients with serious symptoms must be below 50 percent. If it meets both conditions for seven consecutive days, Kyoto can request the emergency be lifted. But Kyoto just met both criteria for the first time on Feb. 6.

Hyogo set conditions on new cases and bed spaces as well. Its number of new cases for the previous seven days has to be 10 or less per 100,000 people; and the occupancy rate for beds for patients with serious symptoms must be under 50 percent. Hyogo must meet both conditions for seven days in a row.

Hyogo also has another condition stipulating that the problems of patients recuperating at home because they cannot be hospitalized or stay at accommodation facilities due to lack of vacancies should be reduced to a certain level.

Hyogo had 345 patients at home on a waiting list for hospitals or accommodation facilities as of Feb. 7.

Hyogo Governor Toshizo Ido was reluctant to ask the central government to lift the state of emergency for the prefecture.

“Now is not a good time to decide it based on the current situation,” he said at a Feb. 8 news conference. “Hyogo, Osaka and Kyoto are included in the same economic and social zone, so we should basically fall into line.”

(This article was written by Chinami Tajika and Ryo Takeda.)